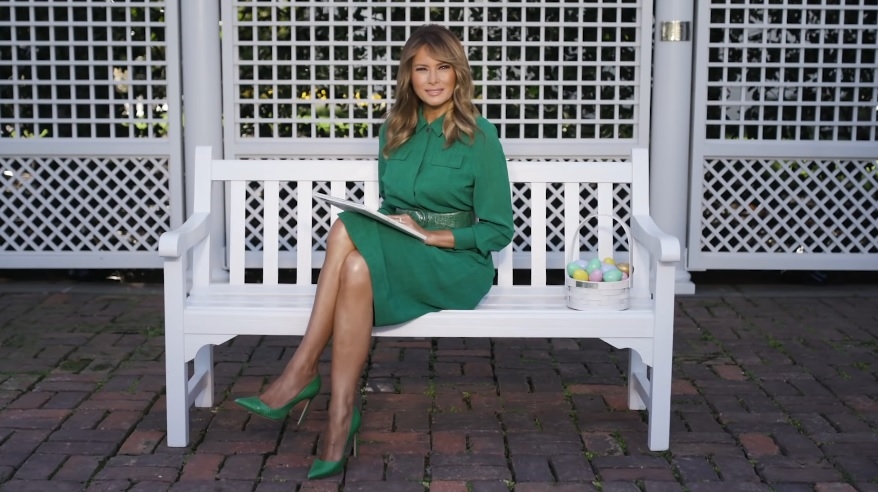 United States First Lady Melania Trump has received both applause and criticisms for her fashion choices over the years. However, her eve of Independence Day dress garnered social media attention for quite a unique reason that even prompted several news outlets to do some fact-checks.

Melania Trump joined her husband, Donald Trump, on the eve of Independence Day at the Mount Rushmore National Memorial. She wore a white, sleeveless midi dress from the Alexander McQueen Spring/Summer 2020 collection.

The dress is covered in sketches that the designer label calls the “Dancing Girls” print. People can zoom in on the drawings through the official product page of the dress where it also shows that it cost $3,840. Before the price tag irks some people, keep in mind that Melania Trump’s office had previously stated, “She pays for all her own clothes.”

In an earlier post at Alexander McQueen’s official Facebook page, the drawings were further described as “continuous, spontaneous sketches of dancing girls.” But the spontaneity of the print may have also been the reason some netizens scrutinized the design of Melania Trump’s dress.

A round-neck dress with an asymmetric draped skirt in ivory Irish linen with dancing girls hand embroidery. The continuous, spontaneous sketches of dancing girls by Central Saint Martins MA students, created during a life drawing class held at the Alexander McQueen educational space in London this year, is the source of these motifs Discover the Spring/Summer 2020 collection here: on.AlexanderMcQueen.com/SS20Womens

Various Facebook and Twitter pages attempted to defend Melania Trump by criticizing “the press” for “mocking” the dress design, per AFP Fact Check. The same posts claimed the sketches were made by survivors of child sex trafficking survivors, which was found to be incorrect.

In the same Facebook post from the designer label, it was stated that the drawings were created by Master of Arts students of Central Saint Martins, a public tertiary art school in London. With some of the inaccurate posts saying the criticisms over Melania Trump’s dress came from the press, PolitiFact also pointed out that the negative comments came from social media and “not ‘the media.’”

Whenever Melania Trump’s fashion choices are being discussed, it would be remiss not to recall the time she wore a $39 Zara jacket in 2018 with the writing on the back, “I REALLY DON’T CARE DO U?” The first lady’s spokesperson, Stephanie Grisham, initially said the jacket did not have any hidden message.

Melania Trump tells @TomLlamasABC she wore the ‘I really don’t care’ jacket “for the people and for the left-wing media who are criticizing me. And I want to show them that I don’t care.” #MelaniaTrump https://t.co/ZOcFC8ZwX3 pic.twitter.com/WDqqXBUmwL

However, Melania Trump later confirmed in an ABC News interview that it was aimed at her critics, “I want to show them that I don’t care. You could criticize. Whatever you wanna say, you can say. But it will not stop me to do what I feel is right.” The first lady also faced scrutiny after wearing a Dolce & Gabbana jacket in 2017 that reportedly cost over $51,000. It was followed by reports comparing the price of the piece of clothing to the per-year salary of workers.