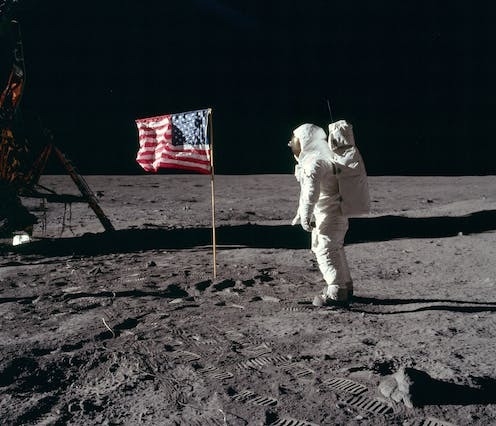 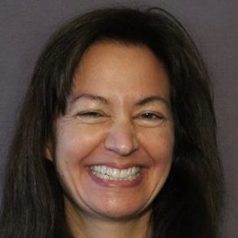 It’s been 50 years since humans last visited the Moon, and even robotic missions have been few and far between. But the Earth’s only natural satellite is about to get crowded.

At least six countries and a flurry of private companies have publicly announced more than 250 missions to the Moon to occur within the next decade. Many of these missions include plans for permanent lunar bases and are motivated in large part by ambitions to assess and begin utilizing the Moon’s natural resources. In the short term, resources would be used to support lunar missions, but in the long term, the Moon and its resources will be a critical gateway for missions to the broader riches of the solar system.

But these lofty ambitions collide with a looming legal question. On Earth, possession and ownership of natural resources are based on territorial sovereignty. Conversely, Article II of the Outer Space Treaty – the 60-year-old agreement that guides human activity in space – forbids nations from claiming territory in space. This limitation includes the Moon, planets and asteroids. So how will space resources be managed?

I am a lawyer who focuses on the peaceful and sustainable use of space to benefit all humanity. I believe the 2020s will be recognized as the decade humans transitioned into a truly space-faring species that utilizes space resources to survive and thrive both in space and on Earth. To support this future, the international community is working through several channels to develop a framework for space resource management, starting with Earth’s closest neighbor, the Moon. 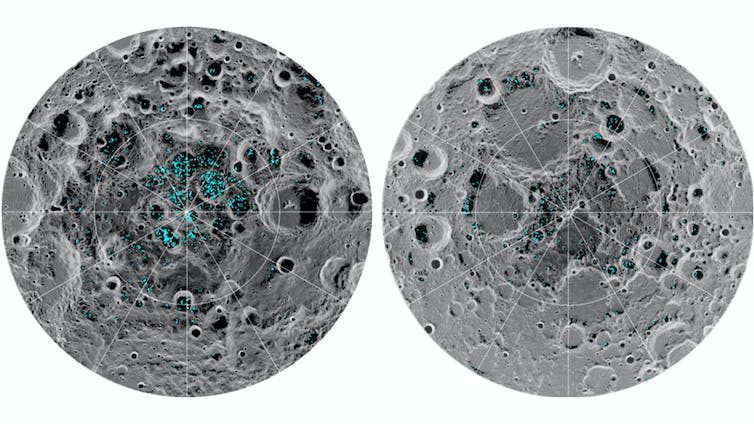 Water is one of the most valuable resources on the Moon and is mostly located in craters at the south pole, left, and north pole, right. The blue in the images represents areas of surface ice. NASA

The U.S.-led Artemis Program is a coalition of commercial and international partners whose first goal is to return humans to the Moon by 2024. Ultimately, the plan is to establish a long-term lunar base. Russia and China have also announced plans for a joint International Lunar Research Station and invited international collaboration as well. Multiple private missions are also under development by companies like iSpace, Astrobotic and a handful of others.

These missions aim to determine what resources are actually available on the Moon, where they are located and how difficult it will be to extract them. Currently, the most precious of these resources is water. Water can be found primarily in the form of ice in shadowed craters in the polar regions. It is necessary for drinking and growing food, but when split into hydrogen and oxygen, it can also be used as fuel to power rockets either returning to Earth or traveling beyond the Moon.

Other valuable resources on the Moon include rare Earth metals like neodymium – used in magnets – and helium-3, which can be used to produce energy.

Current research suggests that there are only a few small areas of the Moon that contain both water and rare Earth elements. This concentration of resources could pose a problem, as many of the planned missions will likely be headed to prospect the same areas of the Moon. 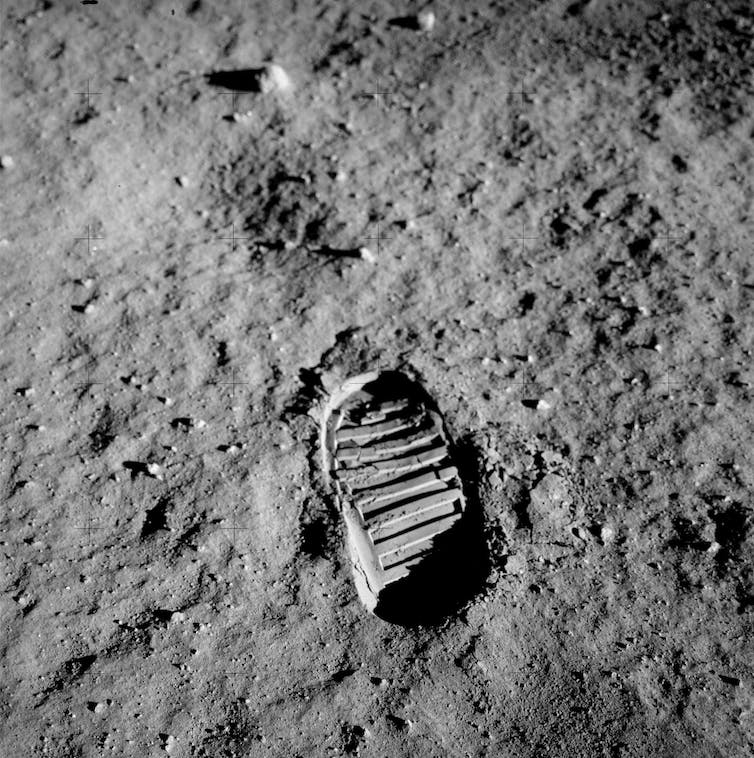 A layer of fine dust and sharp rock shards covers the surface of the Moon, as shown in this photo taken by Buzz Aldrin in 1969. NASA/Buzz Aldrin

The last human on the Moon, Apollo 17 astronaut Eugene Cernan, called lunar dust “one of the most aggravating restricting facets of the lunar surface.” The Moon is covered by a layer of fine dust and small, sharp rock fragments called regolith. Since there is virtually no atmosphere on the Moon, regolith is easily blown around when spacecraft land or drive on the lunar surface.

A part of the 1969 Apollo 12 mission was to bring pieces of Surveyor 3 – a U.S. spacecraft that landed on the Moon in 1967 to study its surface – back to Earth. The Apollo 12 lunar module landed 535 feet away from Surveyor 3, but upon inspection, engineers found that particles blown by Apollo 12 exhaust punctured the surface of Surveyor 3, literally embedding regolith into the hardware.

It’s not hard to imagine a lander or even a surface rover of one country passing too close to another country’s spacecraft and causing significant damage. 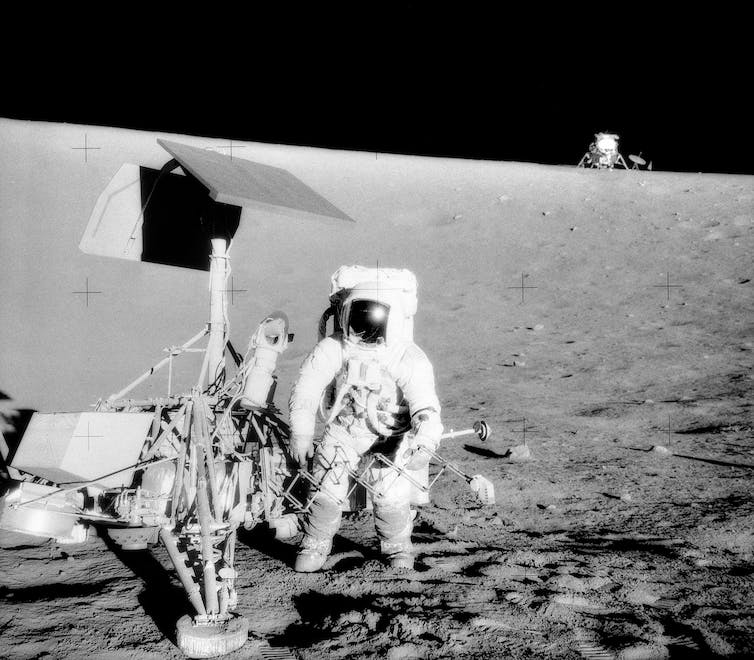 Dust from the landing of Apollo 12, seen in the background in this image, punctured metal on the Surveyor 3, front, from more than 500 feet away. NASA/Alan L. Bean

A need for rules

As efforts to return to the Moon began ramping up in the 2000s, NASA was so concerned by the destructive potential of lunar dust that in 2011 it issued a set of recommendations to all space-faring entities. The goal was to protect Apollo and other U.S. objects on the lunar surface that are of historical and scientific value. The recommendations implement “exclusion zones,” defined by NASA as “boundary areas into which visiting spacecraft should not enter.” These suggestions are not enforceable against any entity or nation unless they are contracting directly with NASA.

The very concept of these zones violates the plain meaning and intent of Article II of the Outer Space Treaty. The article states that no area of space is subject to “national appropriation” by “means of use or occupation.” Creating an exclusion zone around a landing or mining site certainly could be considered an occupation.

However, the Outer Space Treaty does offer a potential solution.

Article IX of the Outer Space Treaty requires that all activities in space be conducted “with due regard to the corresponding interests of others.” Under this philosophy, many nations are currently working toward collaborative use of space resources.

To date, 21 nations have agreed to the Artemis Accords, which use the due regard provision of the Outer Space Treaty to support the development of “notification and coordination” zones, also called “safety zones.” While 21 nations is not an insignificant number, the accords do not at this time include the major space-faring nations of China, Russia or India.

In June 2022, the United Nations Committee on the Peaceful Uses of Outer Space formed the Working Group on Legal Aspects of Space Resource Activities. This group’s mandate is to develop and recommend principles concerning the “exploration, exploitation and utilization of space resources.” While the group has yet to address substantive matters, at least one country not in the Artemis Accords, Luxembourg, has already expressed an interest in promoting safety zones.

This working group is a perfect avenue through which safety zones like those outlined in the Artemis Accords could get unanimous international support. For All Moonkind, a nonprofit organization I founded that is composed of space experts and NASA veterans, has a mission to support the establishment of protective zones around sites of historic significance in space as a first version of safety zones. While initially driven by the aggravating lunar dust, safety zones could be a starting point for the development of a functional system of resource and territory management in space. Such an action would protect important historical sites. It could also have the added benefit of framing resource management as a tool of conservation rather than exploitation.