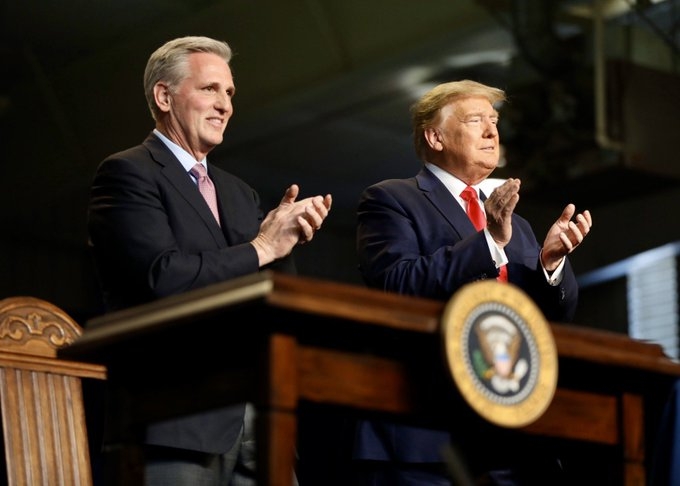 Republicans that are staunch allies of disgraced former President Donald Trump are lately blasting the ongoing probe by the bipartisan January 6 House committee. One of them, House Minority Leader Kevin McCarthy was blasted by the committee over his false claims of the former president’s involvement in the insurrection.

Over the weekend, CNN reported that McCarthy was shut down by the House select committee after it released a statement criticizing the House Minority Leader for telling a news outlet that the twice-impeached former president was cleared of all charges relating to the riots. Last week, during an interview with KGET, McCarthy suggested that the former president was cleared of wrongdoing, saying that the FBI had already investigated his involvement and that House Speaker Nancy Pelosi’s handling of the probe was political.

This prompted the House committee led by Democratic Rep. Bennie Thompson and vice-chair Republican Rep. Liz Cheney to respond in a blunt statement.

“(McCarthy) has suggested, based on an anonymous report, that the Department of Justice has concluded that Donald Trump did not cause, incite, or provoke the violence on January 6th,” said the statement. “When this anonymous report was first published, the Select Committee queried the Executive Branch agencies and congressional committees involved in the investigation. We’ve received answers and briefings from the relevant entities, and it’s been made clear to us that reports of such a conclusion are baseless.”

McCarthy’s comments also come as the House panel is looking to obtain phone records of certain members of Congress over suspected involvement in the insurrection. McCarthy is one of them after the impeachment trials revealed that he was in contact with Trump during the siege that left five people dead and dozens of police officers injured.

The House Minority leader was also humiliated by a conservative accountability group, the Republican Accountability Project, in a new advertisement that featured comparisons between him and the late Senator Joseph McCarthy. The late Republican Senator was known for stoking fears over anti-communism in the 1950s.

The advertisement on the group’s Youtube channel, which is part of the anti-Trump Defending Democracy Together Organization, says that both McCarthys are not so different from one another despite coming from two different eras of the US government.