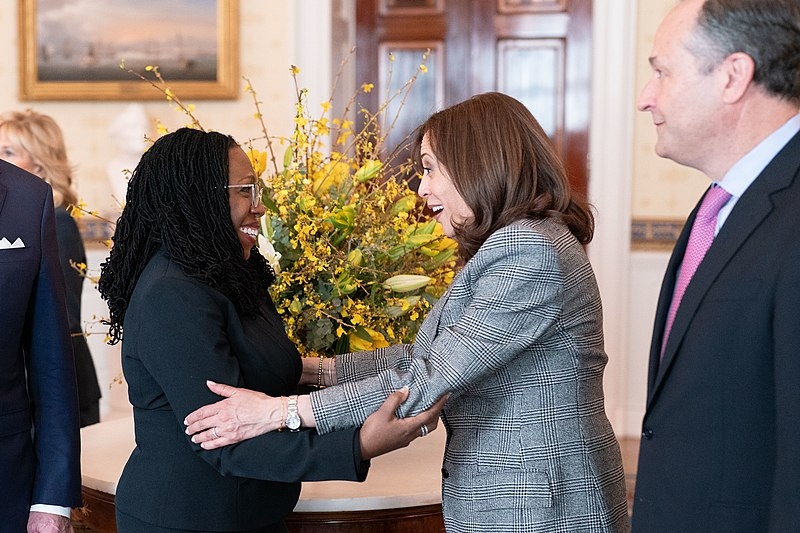 US Vice President Kamala Harris made history as the first Black and South Asian to get elected to the vice presidency. Harris also witnessed history made last week when the Senate voted to confirm Ketanji Brown Jackson to the Supreme Court.

Speaking with reporters after the Senate voted to confirm Jackson, who will become the first Black woman to serve as a Supreme Court Justice, Harris said that she was “overjoyed” and “deeply moved.” Harris presided over the confirmation vote, Jackson getting confirmed by a vote of 53-47, with three Republican lawmakers joining the Democrats to vote for Jackson.

“Deeply moved…that we have just made a decision to put this extraordinary jurist on the highest court of our land. It’s a good statement about who we are,” said Harris.

Harris was seen handing a note to Democratic Senators Cory Booker and Raphael Warnock during the confirmation votes. Booker and Warnock were reportedly told by Harris to write a letter to young Black girls in their lives. Warnock later shared the note he wrote to his daughter on his Instagram.

Prior to the vote, Warnock said that Jackson “embodies the arc of our history.”

“She is America at its best. That I believe in my heart after meeting with her in my office, talking to folks who I trust who know her and hearing her testimony before the Senate Judiciary Committee,” said the Georgia Democrat.

US President Joe Biden also shared a photo of himself and Jackson on Twitter as well as the selfie he took of the two of them shortly after the Senate confirmation.

Harris also wrote a letter to her teenage goddaughter about the significance of Jackson getting confirmed to the Supreme Court by the Senate. Harris referenced the letter she wrote to her goddaughter during her remarks at the White House event Friday celebrating Jackson’s confirmation.

Harris wrote that she was presiding over the Senate’s confirmation vote on Jackson and that she felt a “deep sense of pride and joy” for Jackson’s confirmation and what it would mean for young Black girls like her and for the current and future leaders of the country.