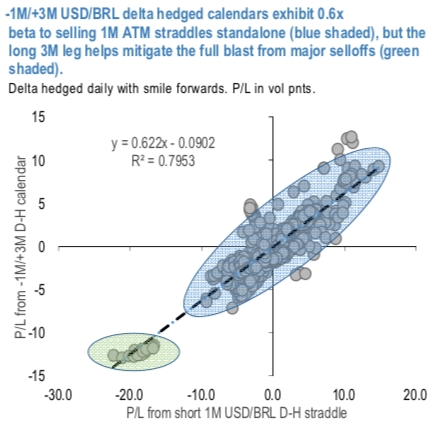 How much further will the Brazilian central bank (BCB) cut its key rate? Today it will certainly cut it by a further 50bp to then 5%. It had signalled its willingness to do so at its last meeting in September, and the conditions for further easing are given. In September inflation stood at 2.9%, i.e. at the lower end of the BCB’s target corridor (2.75 - 5.75%). Moreover following a long-winded process the much feted pensions reform was finally passed by the Senate as well last week. As a result a major factor for uncertainty, which the BCB had also constantly referred to, has been overcome and as a consequence BRL was able to appreciate over the past days.

In addition, with the major domestic political risk out of the way after the passage of the social security reform in Brazil, and the global environment expected to be relatively benign over the next few weeks, there is room for BRL vols to catch-down to the softening in the rest of the EM vol complex over the past two weeks.

We do not expect BRL to be disrupted either by proxy hedging demand in the run-up to the upcoming Argentina election, or by the postponement of the December oil auction. 1M ATM vol (12.8) is already 1 pt. lower from its local high, and we reckon that realized vol can soften to below 10% with the SSR out of the way.

Given the flatness of the front-end of the vol curve (3M – 1M spread 0.2), we consider it prudent to quasi-hedge the outright gamma short by structuring it as a -1M / +3M straddle calendar (vega-neutral, delta-hedged).