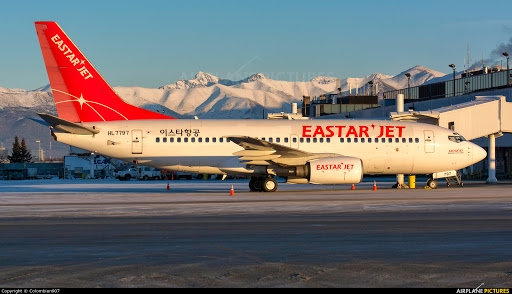 Eastar Jet is eager to revive the takeover by Jeju Air

The founding family members of Eastar Jet Co. will donate their entire 38.6 percent stake in the firm to Jeju Air Co. to bring the latter's stalled takeover of Eastar back.

Rep. Lee Sang-jik of the ruling Democratic Party, Eastar Jet's founder, and his family owns the 38.6 percent stake in the airline through its parent Eastar Holdings Co.

The value of the family's stake in Eastar reaches 41 billion won.
Eastar Jet President and Chief Executive Choi Jong-gu in a press conference said they "desperately call on Jeju Air" to clarify its intentions to acquire Eastar Jet.

Choi also asked the government to assist the airline industry before it goes bankrupt financially.

Jeju Air had signed a deal to acquire 51.17 percent of Eastar for 54.5 billion won to expand operations while the coronavirus was impacting the airline industry.

Consequently, Eastar Jet suspended all of its flights and sent its 1,700 employees on "paid leave" in late March.

Jeju Air was expected to issue 10 billion won worth of convertible bonds on June 30 as a prerequisite to the takeover.

Eastar Holdings would then purchase the bonds and convert them into Jeju Air equities.

However, Jeju Air changed its position in May as the pandemic worsened, according to Eastar Jet.

Eastar claimed that unpaid wages had reached around 24 billion won.
Jeju Air, who said the deal needs approval from Vietnam and Thailand, reiterated that it would proceed with the acquisition to gain a more significant market share and strengthen its global competitiveness.