“Cyberpunk 2077” developer CD Projekt Red recently launched a real website for the game’s fictional main location called the Night City. Not surprisingly, it is unlike any official websites for cities and because one of the first features to greet site visitors is its prominently displayed body count report.

The official Night City website has its own domain that was unveiled in the third episode of Night City Wire. While typical city websites boast tourist attractions and the best the city has to offer, “Cyberpunk 2077” version is much different. The said death counter can be found on the top left corner of the page and it appears to be updating at random times.

Page visitors will also be greeted with several pop-up ads as soon as they open the Night City website -- the ones that are displayed over the site’s main content. Typically, these would have been annoying but the ads show various in-game companies so this might be the first time for many “Cyberpunk 2077” fans to deliberately browse through the ads. Arasaka appears to be the biggest advertiser with various “protection” services to promote and plenty of ads money at its disposal. 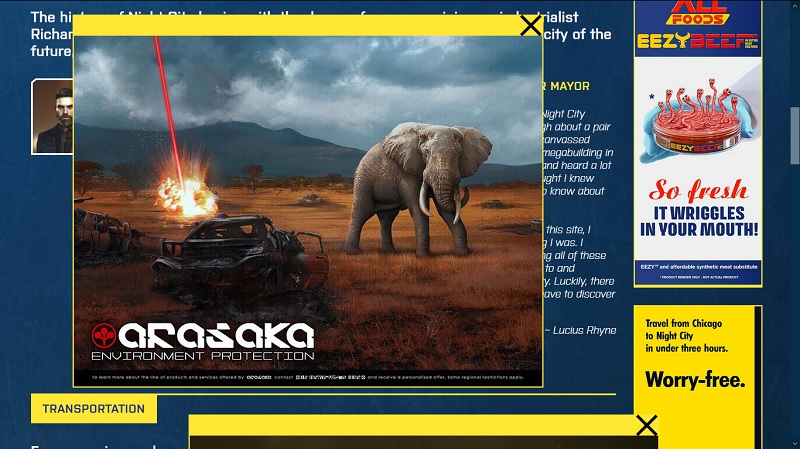 The website offers more details about the seven districts within Night City namely City Center, Watson, Heywood, Westbrook, Santo Domingo, Pacifica, and the Outskirts. Descriptions for every district are fun to read, but the more interesting content is the Night City Police Department Threat Level for every location. Of the seven districts, only the City Center is categorized as safe but its accompanying assessment does not sound so convincing: “Rumors of muggings and acts of gang violence in the back alleys and side streets of Downtown have either been greatly exaggerated or are grossly out of date.”

On the other hand, these threat level assessments and descriptions might come in handy when players first explore Night City once “Cyberpunk 2077” is released. These bits of information serve like extensions of the things that were said and shown in the latest trailers that reveal more about the Night City gangs and the districts where they are based.

To experience the game at its best possible quality, the recommended specs are 64-bit Windows 10, Intel Core i7-4790 or AMD Ryzen 3 3200G, 12GB RAM, and GeForce GTX 1060 (6GB) or AMD Radeon R9 Fury. CD Projekt Red says “Cyberpunk 2077” will still play with HDD, but the developer recommends SSD with at least 70GB free space. Aside from PC, “Cyberpunk 2077” will also be released on PlayStation 4 and Xbox One with free upgrades on the upcoming PlayStation 5 and Xbox Series X.