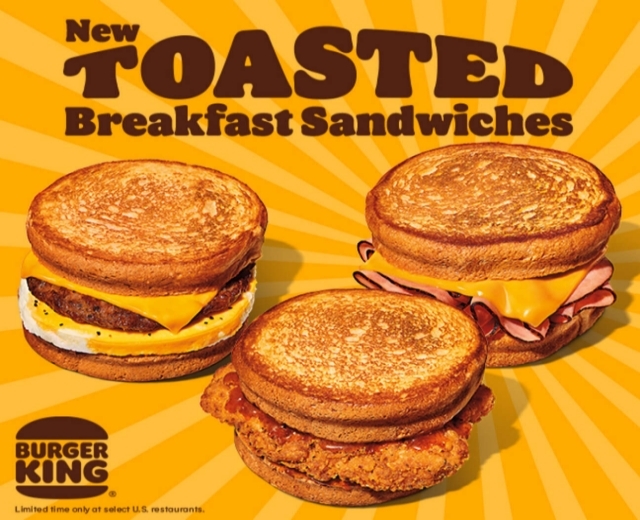 Burger King is set to begin testing three toasted breakfast sandwiches this month, and it will begin on Jan. 13 at Buffalo, New York City. Since the new food items are still on trial, they will be available for a limited time only.

As posted on Chew Boom, the new toasted breakfast sandwiches at Burger King include the Ham and Cheese, which feature ham and melted American cheese. This is sandwiched in two toasted bread rounds.

For chicken lovers, they can try the Crispy Chicken Toasted Breakfast Sandwich. This is served with a homestyle chicken fillet that has been fried to crisp. It also has smoky maple glaze and also enclosed in toasted bread rounds.

The last option is the Cheesy Sausage & Egg Toasted Breakfast Sandwich, which apparently comes with fried egg, melted American cheese, and sausage patty. And just like the two other sandwiches, toasted bread rounds are also used.

The new range of breakfast sandwiches is just the right offering for customers to have a delicious breakfast. They can get up in the morning and enjoy a new kind of taste that will only be offered at Burger King. Moreover, many people opt to get their breakfast filled via quick-service restaurants, so fast-food chains are innovating their breakfast menus to offer good food.

As Foodsided noted, the toasted breakfast sandwiches are not yet officially part of the menu at Burger King, but they will be if they are well-received during the trial period.

The testing of the new Burger King breakfast sandwich range comes not long after the fast-food chain launched its Whopper Melts in participating BK locations in Ohio. The burger will also be offered to customers for a limited period as of this time.

Promotional ads for the new Burger King Toasted Breakfast Sandwich will surely make customers rush to Buffalo, New York, where it is currently being tested. The photos are really enticing with all those premium ingredients and nice textures. Meanwhile, Burger King has yet to roll out the new line of breakfast sandwiches nationwide, and many would wish it would be soon.