KFC debuts Beyond Meat fried 'chicken' in the US 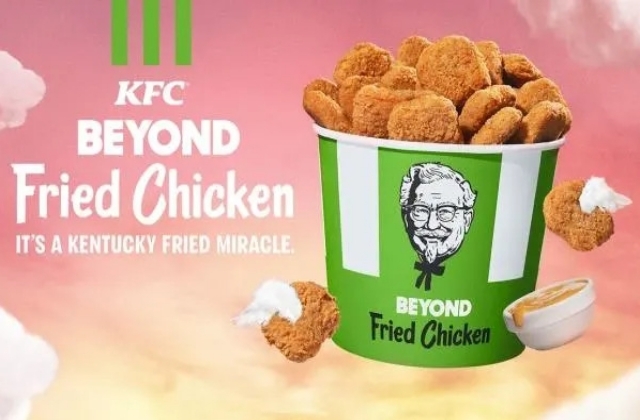 KFC will officially begin selling its Beyond Meat plant-based fried chicken in the United States starting Jan. 10. The “meatless” chicken will be in KFC stores across the country for a limited time only.

According to Reuters, shares of Beyond Meat increased more than seven percent in after-market trading as KFC launches its plant-based fried chicken. As of 2020, the restaurant’s parent company, Yum Brands,’ operates almost 4,000 restaurants in the US, and KFC is one of its brands that is adding new vegan meal options.

The fried chicken chain started testing Beyond’s chicken in mid-2019 and the following year, it added more locations for its plant-based chicken testing. Then last year, Yum Brands and Beyond Meat publicly announced their partnership to make “meatless” menu items for some of its fast-food franchises including Pizza Hut, Taco Bell, and KFC.

The restaurant brands under Yum are one of the several names in the food industry that have jumped into the vegan trend. Many major fast-food chains are competing to partner with the leading meat alternative food maker so they can also add vegetarian food menu options to their stores.

At any rate, while KFC has joined forces with Beyond Meat, the latter’s rival Impossible Foods is now working with Burger King which is operating under another major restaurant company, Restaurant Brands International Inc.

It was said that KFC’s Beyond Fried Chicken will be sold in stores with a starting price of $6.99. This will be the selling price in most locations since prices may differ depending on the area.

“The mission from day one was simple – to make the world-famous Kentucky Fried Chicken from plants,” KFC US president, Kevin Hochman, said in a press release via Yahoo Finance. “And now over two years later we can say, ‘mission accomplished.’”

Beyond Meat’s founder and chief executive officer, Ethan Brown, further added, “We could not be prouder to partner with KFC to offer a best-in-class product that not only delivers the delicious experience consumers expect from this iconic chain but also provides the added benefits of plant-based meat. We are truly thrilled to make it available to consumers nationwide.”