Vladimir Putin has never tried that hard to hide his nostalgia for the Soviet Union. And why should he? It’s a fondness which he shares with many of his fellow countrymen; 66 per cent of Russian respondents to a 2018 poll said they regretted the breakup of the USSR. Every time the president describes the collapse of the union as the greatest catastrophe of the 20th century he is drawing on a deep well of domestic political capital.

This enthusiasm for the USSR is not widely shared by the Russian Federation’s neighbours, however. A 2017 poll indicated that just 34 per cent of 18–34-year-olds in Belarus view the breakup of the Soviet Union negatively. In Ukraine, the result was even lower at 20 per cent. Still, as demonstrated by Moscow’s support for separatists in the Donbas and not-so-subtle hints directed at Minsk, it would seem that the great Russian octopus is once again uncurling its tentacles across Eastern Europe. 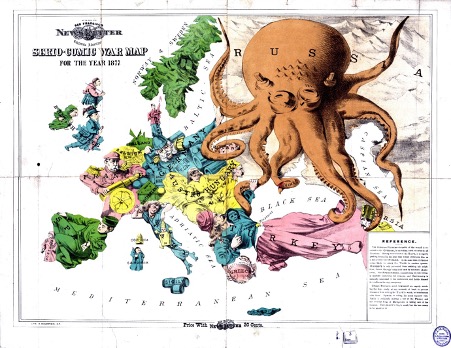 Vladimir Putin’s association with and fondness for the Soviet period and its symbolism is clear enough. As a young KGB foreign intelligence officer during the 70s and 80s, he was on a path towards membership of the union’s elite. In 2000, shortly after he assumed the Russian presidency, he hosted a key gathering of Russia’s oligarchs at Stalin’s dacha on the outskirts of Moscow. In recent years, he has gone to great lengths to claim the USSR was responsible for the defeat of Nazism and his glossing over of Stalin’s atrocities is telling. Even so, it would be a mistake to assume the Russian president is just a Soviet apologist.

Putin grew up in Saint Petersburg, the seat of the Russian Tsars from its foundation under Peter the Great in 1703 until the October Revolution in 1917. Both culturally and historically, the city is closely associated with the emergence of Russia as a great power. As a boy, the future president would have been surrounded by evidence of Russia’s imperial might, even if much of it was deliberately obscured by communist iconography.

Putin is also a devout follower of Russian Orthodoxy, at least in public. This alone is not unusual – a 2019 poll suggested that 79 per cent of Russians identified as orthodox Christians – but the religion’s popularity and connections with the imperial period help to explain the Russian president’s public devotion.

Positioning themselves as the successors to the Byzantine Empire, the Russian Tsars drew strong legitimacy from the church, even adopting the Byzantine double headed eagle as their primary symbol. It is clear that Putin appreciates the enduring influence of the Russian Orthodox Church, and he is regularly seen alongside key leadership figures – particularly Patriarch Kirill of Moscow. The double headed eagle is also a key symbol of Russia once again, replacing the hammer and sickle on the country’s coat of arms in 1993.

By embracing the symbols of the Russian Empire, and combining them with affection for the Soviet period, Putin has developed a powerful composite philosophy – one he is using as a vehicle to justify his own imperial project.

The stage has been set for the emergence of a third Russian Empire, one which seeks to legitimise itself by drawing on the legacies of both the USSR and Imperial Russia.

None of this is good news for the only recently independent states of the former Soviet Union or Warsaw Pact. As Russian historical revisionism gathers pace, so too have calls from within the country to reclaim the lost territory of its two great empires.

This process is already well under way, with Russian adventurism in Georgia and the Crimea serving as the most visible expressions of Moscow’s growing imperial ambitions to date. The Kremlin has yet to completely absorb a whole country, but there are plenty of strong candidates.

Belarus is perhaps at the greatest risk of losing its short-lived independence. The government of Victor Lukashenko is already highly reliant on trade with Russia for its continued survival and ill-conceived EU, UK, and US sanctions have only served to further entrench this relationship. Worse still, the sanctions have disproportionately affected the people of Belarus rather than the country’s elites, negatively impacting public support for the West.

Sadly, it seems the EU, UK and US have abandoned Belarus, simply seeing it as a Russian proxy. In doing so, the Western powers have committed the country to eventual integration into Putin’s imperial project – establishing Russian armour, infantry, and aircraft on another EU border in the process.

This outcome is not inevitable. Sanctions could still be lifted, sparing the people of Belarus further hardship, earning the West a valuable and growing base of democratic support in Putin’s back yard, and lowering the chance of a cornered Lukashenko cutting the flow of gas from east to west. Granted, this approach would not be as flashy as a new sanctions regime. It would take time and patience on the part of the Western powers to nurture a grassroots democratic opposition.

Nevertheless, the price of stubborn inaction is clear. Failure to change course will only drive Belarus further into Russia’s orbit, bringing Putin’s goal of post-Soviet re-integration one step closer.