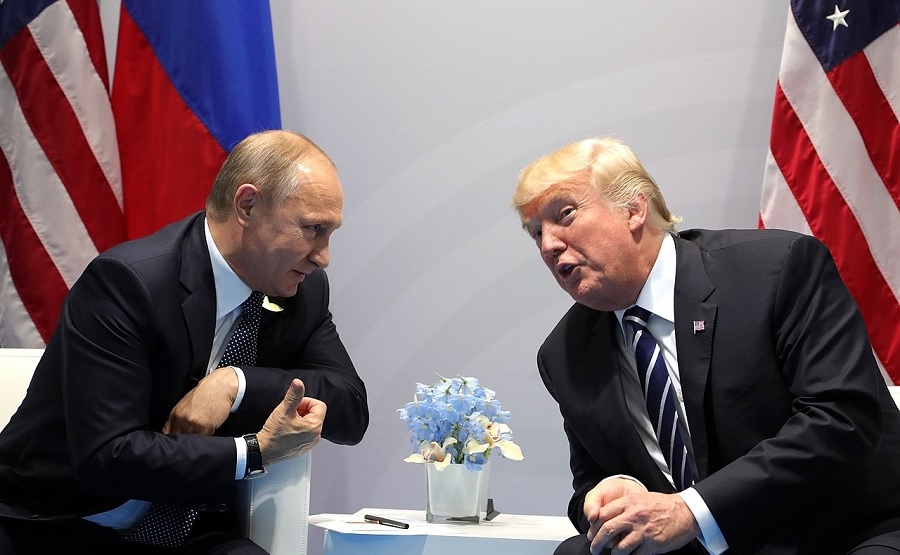 Russia’s Vladimir Putin and Donald Trump at the 2017 G-20 Hamburg Summit. | Photo by Kremlin.ru [CC BY 4.0 (https://creativecommons.org/licenses/by/4.0)] via Wikimedia Commons

Even before the G7 summit took place over the weekend, many have been expecting the world leaders to tackle one thing: the possibility or impossibility of inviting Russian President Vladimir Putin back. Now, reports have it that United States President Donald Trump was allegedly the firm advocate of making that happen.

Russia was one of the core members of the then G8. Putin last attended the summit in 2013 until he was suspended from the organization in 2014 following Russia’s annexation of Crimea. In 2017, the Russian Federation ultimately left the international economic organization.

As expected, the matters about Russia's status as a member of the powerful block was one of the topics discussed by the leaders. But diplomats have reported that Trump was practically alone in strongly advocating for it.

Sources of the Guardian said it was a hot topic that led to "heated exchanges" during the leaders’ dinner on Saturday. Other than Trump, only Italian Prime Minister Giuseppe Conte was open to having Putin back while Japan's Shinzo Abe was reportedly neutral about the issue.

One European diplomat who witnessed the discussion told the same publication that most of the leaders from the core members of G7 were adamant in not having Putin back on the table. The leaders against Trump’s suggestion reportedly insisted that the G7 is an association founded on “liberal democracies” and implied that Putin does not embody that.

Does Vladimir Putin want to bring back the G8?

Neither Trump nor the other state leaders revealed all the details about how the talks about Putin went down. But Trump acknowledged that they did have a “lively discussion” on the possibility of inviting Russia again and added that it is “certainly possible.”

However, the one important opinion is of Putin and whether or not the Russian Federation actually wants to bring back the G8. To that, Russian Foreign Minister Sergei Lavrov said on Monday that the Putin administration has moved on since permanently leaving the G8. Lavrov also implied that Putin’s government has no plans on lobbying for its return to the group. He added that Russia is fine with attending other economic block summits since important policies and international affairs are also being discussed in G20 and BRICS meetings where Russia and the G7 are members as well.