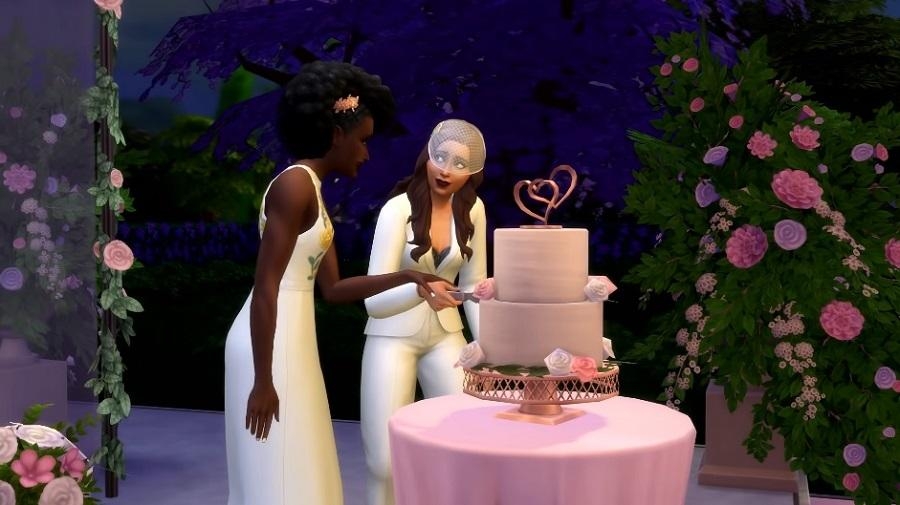 From “The Sims 4: My Wedding Stories” trailer | Photo credit: The Sims / YouTube screenshot

EA and Maxis are gearing up to release the next Game Pack for “The Sims 4” officially called “My Wedding Stories.” Before the paid content goes live, the developers released the latest update to the base that will allow even players who will not purchase the pack to enjoy some new wedding-themed features.

On the patch notes, EA announced that “The Sims 4” players can choose a new relationship option in Create a Sim to have two Sims start immediately as an engaged couple by setting their relationship to Fiancé. While this feature is being added to the base game, players will get the most out of it if they plan on the “My Wedding Stories” pack.

However, regardless of whether they get the next Game Pack or not, “The Sims 4” players will have access to a new lot type called Wedding Venue. New songs, fitting to be played at weddings, will also be added to the World station library. Every gamer can also play the song featured in the “My Wedding Stories” trailer from the Romance station.

The latest patch also updates 10 items in Create a Sim in line with the upcoming release of “My Wedding Stories.” They mostly include wedding-appropriate clothes, including dresses for women with code descriptions “Wedding Mermaid,“ “Wedding Tiered,” “Frilly Romantic,” “Flutter,” and “Bridesmaid.”

Two new suit jackets for men are also updated in “The Sims 4,” including a double-breasted type. Children and toddlers will have new items so they can be dressed accordingly to attend a wedding. The new items added in the base game are somewhat related to the upcoming wedding-themed content, including a bindi and french tip nails.

The wedding-themed Game Pack for “The Sims 4” was originally scheduled to launch on Feb. 17, just a few days after Valentine’s Day, but it had some setbacks following its announcement. “My Wedding Stories” mainly features the characters, Dominique and Camille, a lesbian couple getting married.

EA initially decided not to release the pack in Russia, where a law passed in 2013 interprets the game’s content as “gay propaganda” explaining its 18+ age rating in the country. But the publisher has since changed its decision, saying in an updated blog post, “We’ve reassessed our options and realized we can do more than we initially believed and we will now release The Sims 4 ‘My Wedding Stories’ Game Pack to our community in Russia, unaltered and unchanged, featuring Dom and Cam.” The pack will now launch on Wednesday, Feb. 23 worldwide.