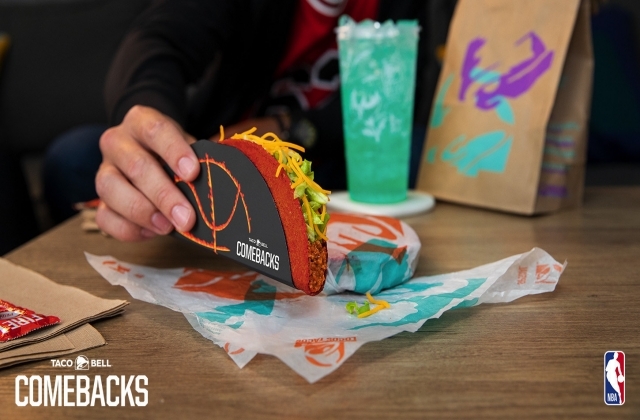 Taco Bell and the NBA team up again to bring back the fans’ flaming favorite menu item. In time for the NBA finals, the fast-food chain will start offering the Flamin’ Hot Doritos Locos Taco again.

WSPA News7 reported that this taco flavor has already been added to Taco Bell’s menu but it was taken out for some time. Now, it is making its comeback for this year’s NBA Finals.

The return of the fan-favorite taco

Taco Bell is not simply re-introducing the Flamin’ Hot DLT but the good news is that the restaurant is even giving them away for free! But fans can only enjoy and grab the free offer if one team manages to make its second-half comeback.

Taco Bell announced the return of the Doritos Locos Taco last week and the offer is set to begin this week. The fan-favorite menu item will also be available for a limited time only since this was brought back just for the NBA final games.

The fast-food chain called the return of the Hot DLT its “NBA Comebacks” promo. With this, it is aiming to let fans enjoy the games while also having the chance to taste the taco flavor without spending a dime.

How to get the free Hot DLT taco at Taco Bell

Taco Bell stated that no purchase is needed to have the taco that is being offered for a limited time. However, the restaurant will only be giving away one taco per customer.

The rule is simple: if any team manages to make a comeback after the half-time, Taco Bell will then start giving away the Flamin’ Hot Doritos Locos Tacos. It is available in any store across the U.S. but there is a designated time and date for claiming the freebie.

"We are thrilled to reignite our partnership with the league and spice up the NBA Finals even more by giving fans the chance to score a free taco regardless of which jersey they're wearing," Nikki Lawson, chief global brand officer at Taco Bell, said in a press release. "The power of Comebacks resonates more than ever, not only because we are turning the heat up in our kitchen to bring back the fan-favorite Flamin' Hot Doritos Locos Tacos, but consumers are now able to enjoy this year's NBA Finals even more whether they're at home, in the arena or elsewhere."

Meanwhile, the Taco Bell NBA Comebacks promo will start at the beginning of the finals and end once either team stages a second-half comeback via Game 7 on July 22.