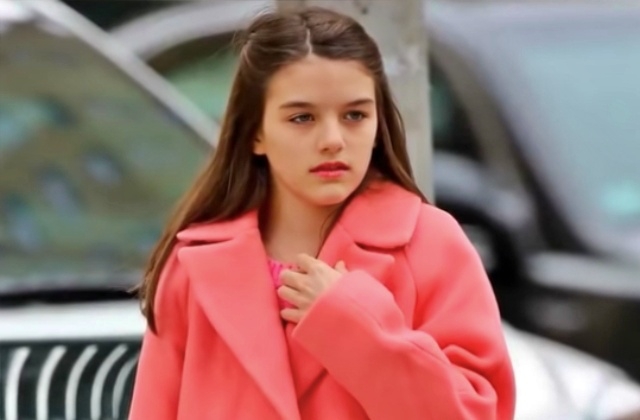 Suri Cruise is one of the most popular Hollywood kids today. She hasn’t even made her debut on show business but she has been getting so much attention already.

In fact, paparazzi love her and her photos always appear in magazines. Those are not even pictures taken for shoots but she is being photographed while walking the street, shopping, day out with her friends and more.

Suri’s reaction to her mom’s dating

Now, the whole time her company other than her friends is her mom Katie Holmes. They spend more time together when the “Dawson’s Creek” actress broke up with Jamie Foxx last year. It was just about the two of them for a whole year.

But now that her mom has a new boyfriend, her mom will have to divide her time again. The changes have started and an example is the photos on tabloids. They are not about Suri Cruise and Katie anymore but it was about the actress and Emilio Vitolo, her new boyfriend.

Photos of Katie Holmes and Emilio have been plastered on various media outlets and all of them are filled with PDAs. Evidently, the 41-year-old actress has no intention of keeping her romance a secret anymore just like she did in the past.

How did Suri Cruise react to PDA photos of her mom? Australia’s Woman’s Day alleged that the 14-year-old was horrified and embarrassed.

“She’s totally red-faced about her mom carrying on like a teenager in public,” the source told the magazine. “It never really happened before so this is a first for her, and like any kid her age, she’s not coping.”

Suri allegedly not in favor and doubting Emilio

What’s more, it was added that Suri is really worried about her mother and she is just one of those who are close to her who feels the same. They are mainly concerned about her because her new beau just dumped his fiancee and he left the impression that he may only hurt Katie as well.

“It’s so embarrassing for this to be so public,” another insider said. “Suri doesn’t think she should be taking this guy seriously. He flirts with everyone who comes into his restaurant and she doesn’t like how he was about to tie the knot until a big-bucks megastar walked into his life.”

Finally, the source further said that Suri cruise is really worried that her mom would be hurt again. She reasoned that Katie just got back on her feet after the split with Jamie and now she is making a bad choice in men again.