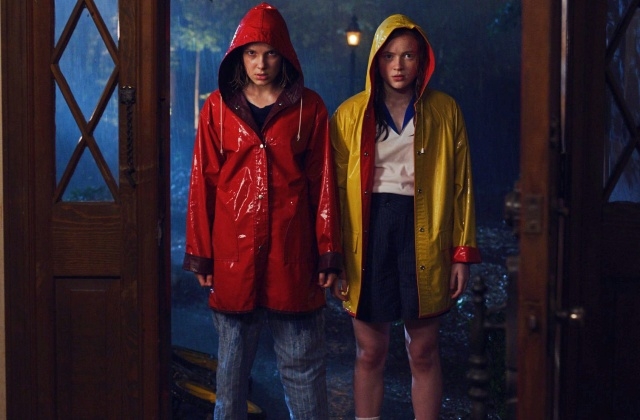 Everyone already knows that filming for “Stranger Things” season 4 has been put on hold for months due to the unexpected emergence of the COVID-19 pandemic. To be more precise, the production was halted for more than six months, and that was a lot of time wasted.

In fact, the filming for “Stranger Things” season 4 was supposed to be completed in August, but the pandemic forced everyone to delay the shoots. Now, they are months behind schedule, but fortunately, they are back on the set to finish filming the sci-fi drama.

Update on the on-going drama production

It was not long ago when photos of the cast and crew were posted online. Just Jared published multiple snaps of the “Stranger Things” season 4 cast while at work at the filming site. In the photos, fans can see Joe Keery (Steve Harrington) and Maya Hawke (Robin Buckley), Gaten Matarazzo (Dustin Henderson), and Sadie Sink (Max) working hard on their scenes.

The group was spotted filming scenarios inside a video shop that is one of the most popular sites in the series. Prior to his, photos of Caleb McLaughlin (Lucas) were also released, and that gave away spoilers for the upcoming “Stranger Things” season 4. He was seen wearing the same outfit that he wore in the season 3 finale, so the fourth season is likely to pick up from that time.

Meanwhile, “Stranger Things” season 4 already has many theories on what may happen next in the drama when it premieres. Previously, fans were debating if Hopper is alive or not, and in the first teaser of the show, it was confirmed that he is alive.

However, there is a theory that the Hopper who showed up in Russia is a different person now. As reported on The Sun, David Harbour is set to reprise his role again as sheriff Hopper, but this time, his character will be nothing like before.

It was suggested that the new Hopper is evil, and he may have become this way after being brainwashed. In the end, he may become a villain to his adopted daughter Eleven.

What’s more, another interesting theory is that Dr. Brenner is also alive. Matthew Modine, who plays Dr. Martin Brenner, said that since no one saw the doctor’s body, there is a high chance he will show up in “Stranger Things” season 4. “And obviously, we never saw Dr. Brenner’s body,” Modine told NME in an interview.

Finally, Natalia Dyer, who plays Nancy Wheeler in the sci-fi drama, teased fans by saying, “Stranger Things,” season 4 will be “something big.” She added that although fans may have to wait for a longer time for the show to return, it will “definitely be worth the wait.”