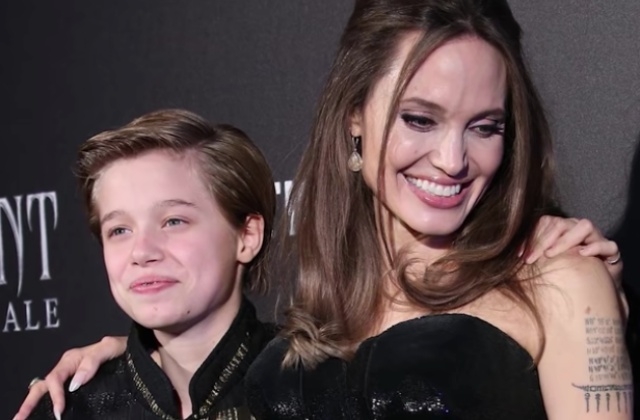 Shiloh Jolie-Pitt is reportedly living really miserably while in Angelina Jolie’s home. This is why she wanted to escape and be far away from her mother and to do this, she has been begging her dad, Brad Pitt, to take her.

Shiloh allegedly asked her dad to save her

The National Enquirer published an article with a shouting headline that reads: “Sad Shiloh Plots Escape From Angie!” The article claimed that the 14-year-old wants to run away from their home because her life there is far from being happy.

She is actually living a very sad life with her mom so she is desperately trying to get her father to “save her” by taking her out of their home. It was suggested that Shiloh wants to live with her dad from now on as her mother is really someone who is deplorable.

It was said that out of Angelina Jolie and Brad Pitt’s children, it was Shiloh who was affected and suffered the most from their breakup. Now she wants to escape from the clutches of her supposedly “witchy” mom.

“The nasty divorce between Jolie and Pitt impacted Shiloh the most,” the insider told the tabloid. "She always had a special connection with Brad that she and Angie could never hope to have - and she's been begging to live with her dad.”

Moreover, it was alleged by the source that Angelina Jolie was almost never home and she is always busy that she never had the time to be with her children especially Shiloh Jolie-Pitt. Aside from work, she always needs to meet the lawyers and deal with her projects so there is no time for the kids.

“People were whispering that Shiloh was constantly on her phone sending emails and texts to her father asking him to take her away,” the insider further snitched. “The young teen was plotting to run away to Pitt’s home to escape her mom.”

Now, is it true that Shiloh Jolie-Pitt wants to escape from her mom and just go live with her dad? Gossip Cop reported that this is surely another untrue story about Brad and Angelina’s daughter.

Shiloh Jolie-Pitt did not even consider leaving her mom and in fact, they have a very good relationship. In fact, they have always been spotted dining out or shopping so it can’t be said that the actress has no time for her kids, especially Shiloh. There are much evidence of Angelina Jolie’s good relationship with her children, so this is truly another phony report from the National Enquirer.