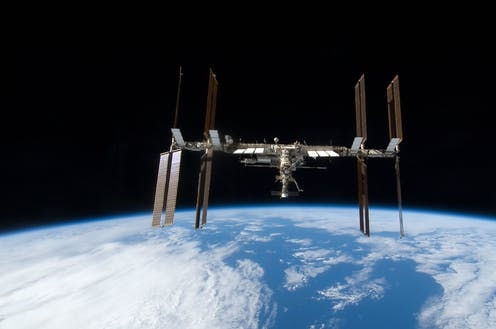 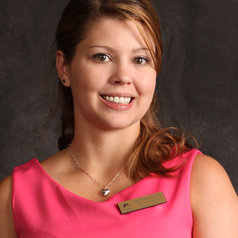 In response to these sanctions, the head of Roscosmos on the same day posted a tweet saying, among other things, “If you block cooperation with us, who will save the ISS from an uncontrolled deorbit and fall into the United States or Europe?”

The International Space Station has often stayed above the fray of geopolitics. That position is under threat.

Built and run by the U.S., Russia, Europe, Japan and Canada, the ISS has shown how countries can cooperate on major projects in space. The station has been continuously occupied for over 20 years and has hosted more than 250 people from 19 countries.

As a space policy expert, the ISS represents, to me, a high point of cooperation in space exploration. But for the current crew of two Russians, four Americans and one German, things may be getting worrisome as tensions rise between the U.S. and Russia.

Several agreements and systems are in place to make sure that the space station can function smoothly while being run by five different space agencies. As of Feb. 24, there were no announcements of unusual actions aboard the station despite the ongoing Russian invasion of Ukraine. But the Russian government has brought the ISS into geopolitics before and is doing so again.

What came to be known as the International Space Station was first conceived on NASA drawing boards in the early 1980s. As costs rose past initial estimates, NASA officials invited international partners from the European Space Agency, Canada and Japan to join the project.

When the Soviet Union collapsed at the end of the Cold War in the early 1990s, the Russian space program found itself in dire straits, suffering from lack of funding and an exodus of engineers and program officials. To take advantage of Russian expertise in space stations and foster post-Cold War cooperation, the NASA administrator at the time, Dan Goldin, convinced the Clinton administration to bring Russia into the program that was rechristened the International Space Station.

By 1998, just prior to the launch of the first modules, Russia, the U.S. and the other international partners of the ISS entered into memorandums of understanding that spelled out how major decisions would be made and what kind of control each nation would have over various parts of the station.

The body that governs the operation of the space station is the Multilateral Coordination Board. This board has representatives from each of the space agencies involved in the ISS and is chaired by the U.S. The board operates by consensus in making decisions on things like a code of conduct for ISS crews.

Even among international partners who want to work together, consensus is not always possible. If this happens, either the chair of the board can make decisions on how to move forward or the issue can be elevated to the NASA administrator and the head of the Russian space agency, Roscosmos. 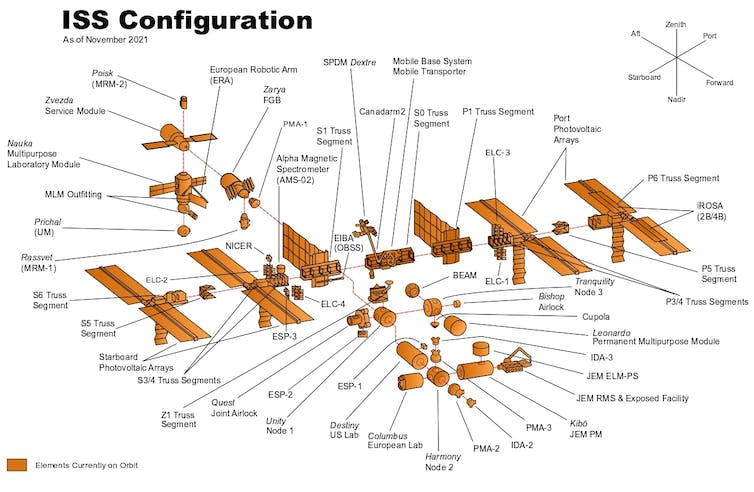 The International Space Station is built of many individual modules that are fully under the control of the countries or agencies that built them. NASA / Colds7ream, Fritzbox, Johndrinkwater, Ras67, Chepry via Wikimedia Commons

While the overall operations of the station are run by the Multilateral Coordination Board, things are more complicated when it comes to the modules themselves.

The International Space Station is made of 16 different segments constructed by different countries, including the U.S., Russia, Japan, Italy and the European Space Agency. Under the ISS agreements, each country maintains control over how its modules are used. This includes the Russian Zarya, which provides electricity and propulsion to the station, and Zvezda, which provides all of the station’s life support systems like oxygen production and water recycling.

The result is that ISS modules are treated legally as if they are territorial extensions of their countries of origin. While all crew onboard can theoretically be in and use any of the modules, how they are used must be approved by each country. 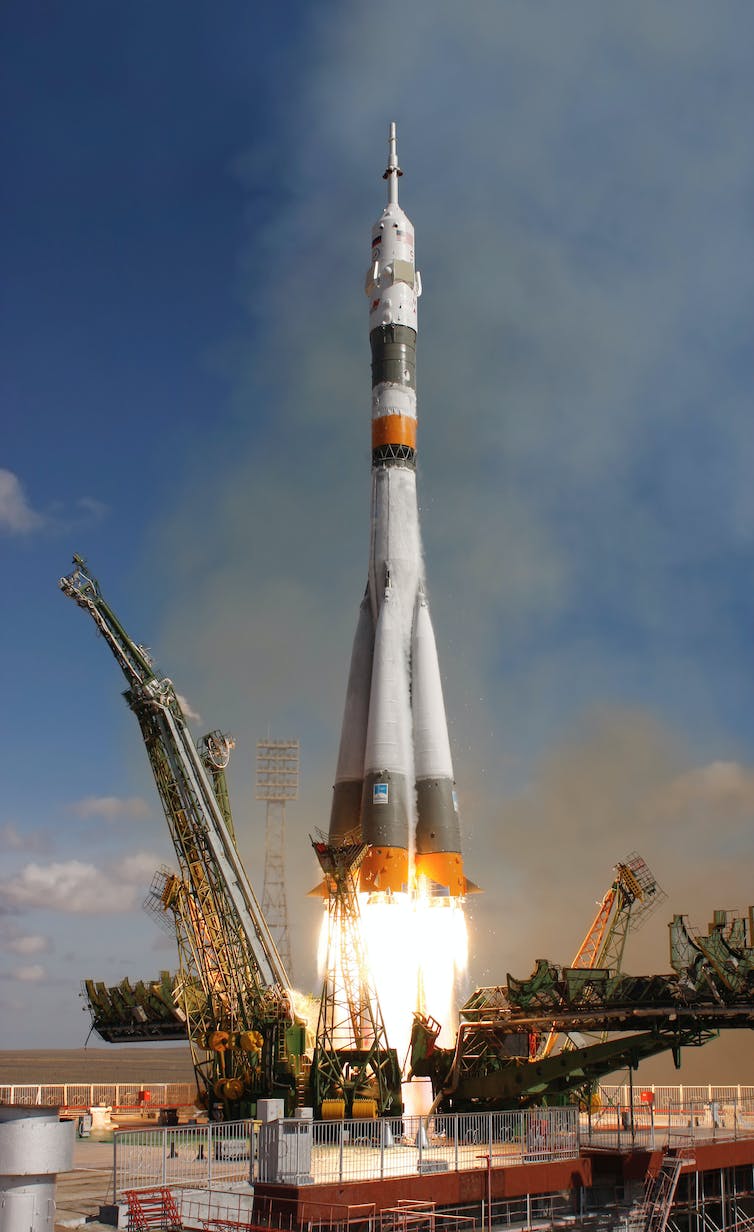 For nearly 10 years, the Russian Soyuz rocket was the only way for astronauts to get to the ISS. NASA/Bill Ingalls via WikimediaCommons

International tensions and the ISS

While the ISS has functioned under this structure remarkably well since its launch more than 20 years ago, there have been some disputes.

When Russian forces annexed the Ukrainian territory of Crimea in 2014, the U.S. imposed economic sanctions on Russia. As a result, Russian officials announced that they would no longer launch U.S. astronauts to and from the space station beginning in 2020. Since NASA had retired the space shuttle in 2011, the U.S. was entirely dependent on Russian rockets to get astronauts to and from the ISS, and this threat could have meant the end of the American presence aboard the space station entirely.

While Russia did not follow through on its threat and continued to transport U.S. astronauts, the threat needed to be taken seriously. The situation today is quite different. The U.S. has been relying on private SpaceX rockets to transport astronauts to and from the ISS. This makes potential Russian threats to launch access less meaningful.

But the invasion of Ukraine does seem to have upped the intensity of geopolitical maneuvering involving the ISS.

The new U.S. sanctions are designed to “degrade their aerospace industry, including their space program.” The tweet in response from Dmitry Rogozin, the head of Roscosmos, “explained” that Russian modules are key to moving the station when it needs to dodge space junk or adjust its orbit. He went on to say that Russia could either refuse to move the station when needed or even crash it into the U.S., Europe, India or China.

Though dramatic, this is likely an idle threat due to both political consequences and the practical difficulty of getting Russian cosmonauts off the ISS safely. But I am concerned about how the invasion will affect the remaining years of the space station.

In December 2021, the U.S. announced its intention to extend operation of ISS operations from its planned end date of 2024 to 2030. Most ISS partners expressed support for the plan, but Russia will also need to agree to keep the ISS operating beyond 2024. Without Russia’s support, the station – and all of its scientific and cooperative achievements – may face an early end.

The ISS has served as a prime example for how nations can cooperate with one another in an endeavor that has been relatively free from politics. Increasing tensions, threats and more aggressive Russian actions – including its recent test of anti-satellite weapons – are straining the realities of international cooperation in space going forward.