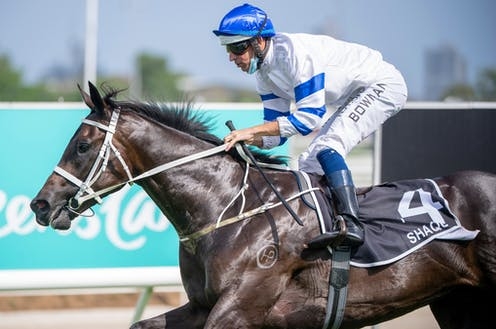 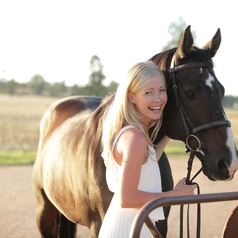 Horse racing is an ethical hotbed in Australia. The Melbourne Cup alone has seen seven horses die after racing since 2013, and animal cruelty protesters have become a common feature at carnivals.

The latest event to spark protests was the Gold Coast Magic Millions last Saturday, one of the most anticipated horse races in Australia. Unlike some other Australian racing carnivals, Magic Millions focuses on two-year-old horses, the youngest age a horse can be raced in Australia.

Yearling (two year old) sales during the carnival eclipsed previous records, with bidders spending a whopping A$200 million for young horses by Sunday.

There have always been inherent risks when it comes to racing horses, but these risks may be amplified when horses as young as two are placed under the intense physical stress of racing. Horse racing should be reformed so limited financial incentives are attached to racing two-year-old horses. Let’s explore why.

Exercise is good for horses, but how much is too much?

Musculoskeletal (soft tissue) injuries are a major threat to the health and welfare of racehorses. This is because their bones, joints, tendons and ligaments are placed under significant stress during physical pre-race training and races.

Physical stress is not necessarily bad for the horse. Research conducted in 2012 suggests the equine musculoskeletal system may benefit from early exposure to exercise, where “bone remodelling” occurs in response to physical stress. This means bone may become thicker and stronger from exercise for young horses, helping to protect them from future injury.

What’s not yet known, however, is just how much exercise is best for the developing young horse and at what age they should be exposed to certain intensities of physical training.

The two-year-old horse Shaquero won the Magic Millions 2YO Classic.

So are two-year-olds really at greater risk of injury?

The answer is not a simple one. Let’s look at what some of the research says.

Another longitudinal Australian study found yearlings outperformed older racehorses. However, of the horses that began racing at two or three years of age, only 46% were still racing two years later. This suggests high rates of “wastage” (when horses leave racing prematurely).

In keeping with this, UK research suggests two-year-old horses and horses older than five may be at a higher injury risk than those aged between three and five.

Research in 1990 indicates between 40-80% of two year olds develop shin soreness, a painful condition for horses. And research 20 years later found three-year-old horses had shin soreness half as often as two year olds.

While shin soreness is not typically a career-ending condition, it does raise questions about the quality of the horse’s racing life.

Then, there’s the issue of whether it’s acceptable to race a “physically immature” horse. Horses don’t fully mature physically until around the age of six.

The research in general indicates the risk of injury may increase as a horse gets older. But this must be considered in light of two things: the cumulative effect of musculoskeletal strain across a horse’s racing lifespan, and the impact of early training and racing on a horse’s injury trajectory.

Most horses begin training at 18 to 20 months of age, well before their skeleton has reached full maturity. 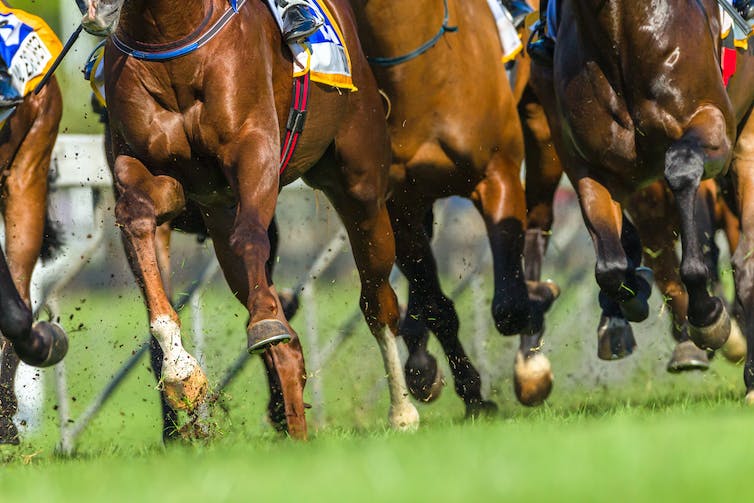 While natural activity and movement may be beneficial to skeletal development, intensive training may place them at a higher injury risk. Shutterstock

As a young horse matures, the cartilage on either end of each bone will fuse, with the horses’ knees typically fusing at around the age of two. This makes their knees vulnerable to injury.

Likewise, the horse’s spine — which controls the horse’s physical coordination and running style — is vulnerable, as it matures last.

As Deb Bennett, an authority on the biomechanics and anatomy of horses, writes:

the higher the speed, and the greater the physical effort, the more important it is that the animal have all of its joints mature and in good working order.

In the end, engaging two-year-old horses in the intensive physical conditioning required to prepare for competitive racing is a bit like asking a 13-year-old child to perform at the peak of their athletic potential. Such efforts may help to build physical strength and stamina, but intensive training may have long-term, negative consequences.

This comparison isn’t a perfect one, as it doesn’t fully highlight the physical maturation patterns of horses. But it does give a sense of the physical status of two-year-old racehorses and their vulnerabilities.

If yearlings are vulnerable, why do we race them?

So if two-year-old horses are not faster and may be at increased risk of injury, why race them at all?

One simple justification is the younger a horse begins its racing career, the earlier the owner and any investors will receive financial returns, with greater potential return on investment across the horse’s career.

An early return on investment may be offset if the longevity of the horse’s career is curtailed. So, if financial prerogatives rest at the heart of horse racing, early financial returns may be seen as justifying the risks. If animal welfare is core to the sport, however, financial considerations lose their relevance.

Given the generous prize money currently on offer in many two-year-old horse races, such as the A$2 million at Magic Millions, and the inherent uncertainty around the longevity of any racehorse, owners may choose to race juvenile horses.

The Conversation reached out to Magic Millions, but the race declined to comment on the arguments in this article. 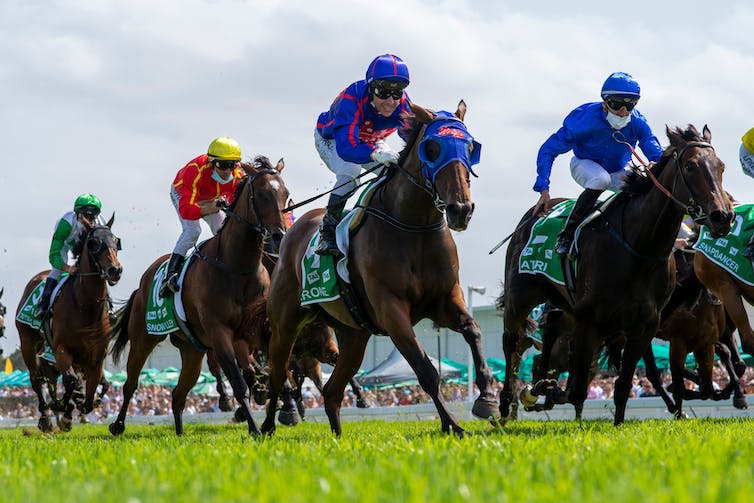 A horse’s peak speed is usually reached at 4.5 years of age. Magic Millions/Twitter

What can be done?

The racing industry and the general public must carefully consider the sustainability of racing two-year-old horses. Some say the practice should be banned. But evidence to support a ban is inconclusive, so the move is unlikely.

Instead, incentives for racing young horses should be reduced. This could mean lowering prize money for, or banning gambling on, two-year-old races.

An independent veterinarian should evaluate a horse’s legs and spine before it begins its racing career, and routinely check these things until it turns four, as a compulsory practice.

There’s also scope for more research into new technologies to monitor horses with veterinary assistance. Any technological advancements should be used as early as possible to detect physiological abnormalities that might impact a horse’s welfare.

There is no one prescribed training regime for racehorses in Australia, and there are perils of a “one-size-fits-all” approach. Still, given what we know about the physical vulnerabilities of two-year-old racehorses, some regulations may be helpful in reforming the sport.

Many age-related reforms would be relatively simple to enforce, if the racing community is prepared to make animal welfare its core priority.