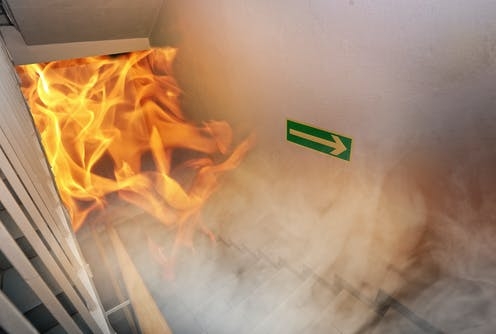 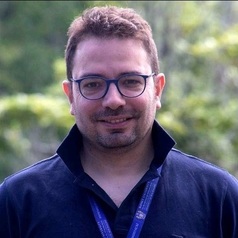 Virtual reality (VR) and augmented reality (AR) aren’t just for gaming anymore, they’re also proving to be useful tools for disaster safety research. In fact, they could save lives.

Around the world, natural and human-made disasters such as earthquakes, bushfires and terrorist attacks threaten substantial economic loss and human life.

My research review looked at 64 papers on the topic of using AR and VR-based experiments (mostly simulating emergency scenarios) to investigate human behaviour during disaster, provide disaster-related education and enhance the safety of built environments.

If we can investigate how certain factors influence people’s decisions about the best course of action during disaster, we can use this insight to further construct an array of VR and AR experiments.

Research has shown the potential of AR and VR in myriad disaster contexts. Both of these technologies involve digital visualisation. VR involves the visualisation of a complete digital scene, whereas AR allows digital objects to be superimposed over a real-life background.

VR has already played a key role in designing safety evacuation systems for new buildings and infrastructure. For example, in past research my colleagues and I have used VR to identify which signage is the best to use in tunnels and buildings during emergency evacuations. 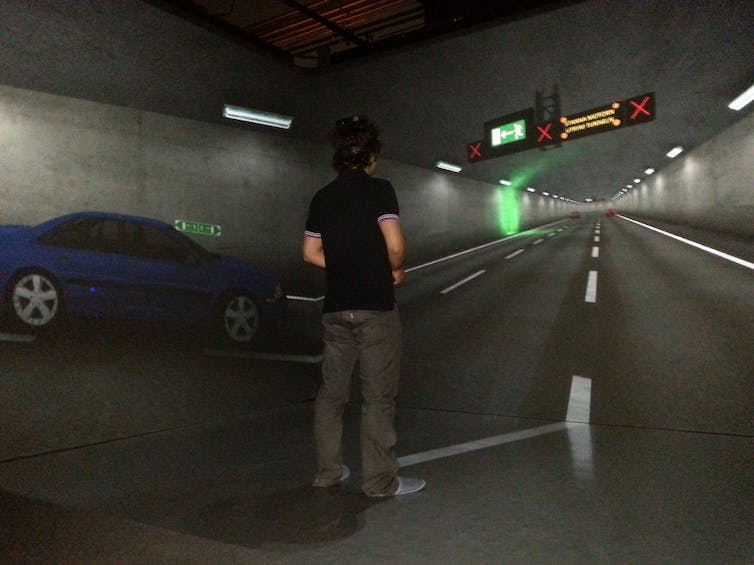 In these studies we asked participants to rank different signs using a questionnaire based on the “theory of affordances”, which looks at what the physical environment or a specific object offers an individual. In other words, we explored how different signs can be sensed, understood and used by different people during emergencies.

Before building expensive new infrastructure, we can simulate it in VR form and test how different evacuation signage performs for participants. In the case of signage for tunnel exits, research showed:

In another non-immersive VR study, we observed participants’ behaviours and identified which sign was the best to direct people away from a specific exit in case of an emergency (as that exit might lead towards a fire, for instance).

The results showed red flashing lights helped evacuees identify the sign, and the sign itself was most effective with a green background marked with a red “X”.

VR and AR are uniquely positioned to let experts study how humans behave during disasters — and to do so without physically harming anyone.

From Pokemon Go to earthquake drills

Research projects have tested how AR superimpositions can be used to guide people to safety during a tsunami warning or earthquake.

In theory, the same approach could be used in other contexts, such as during a terror attack. AR applications could be built to teach people how to act in case of terror attacks by following the rule of escape, hide and tell, as advised by the government.

Such virtual applications have great potential to educate thousands of people quickly and inexpensively. Our latest VR study indicated this may make them preferable to traditional training.

In some of our experiments, several participants were immersed in simulated fire emergencies where they had to evacuate. We investigated the factors that influenced how participants navigated a space to reach an exit, and how they chose between several exits in different fire and social conditions.

Studies on this front have highlighted humans are social animals. In line with “social influence theory”, they tend to follow other people during emergencies. This is a crucial consideration for authorities tasked with designing or implementing disaster evacuation protocols.

Another common behaviour observed was that participants tended to use exits they were already familiar with.

While these findings aren’t necessarily surprising, they help confirm existing theories about public evacuation behaviours. They also help reinforce observations made during real-life evacuation scenarios — where human lives can hang in the balance.

The next challenge is to ensure that in the future, advanced AR and VR-based training applications do not traumatise or distress participants. 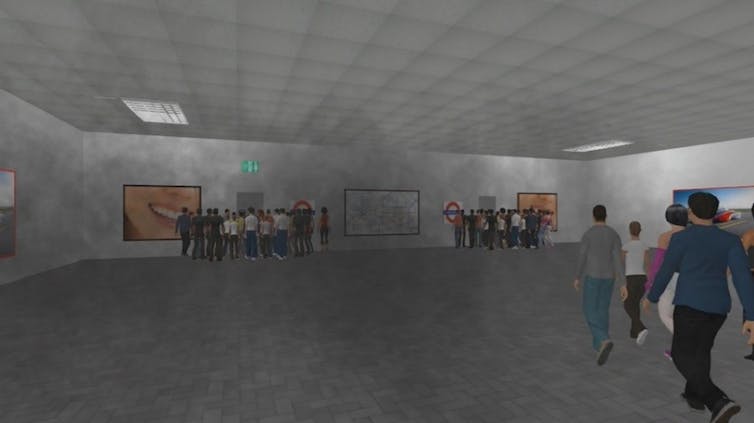 A VR simulation of a metro station, used in one of our research studies. Ruggiero Lovreglio, Author provided

The myth of overwhelming panic

It’s worth noting that in the experiments there were no signs of “panic” among participants. Indeed, research has shown feeling panicked is very rare in fire scenarios.

Rather, participants took several factors into account before choosing what they deemed was the best option. Generally, people in disaster situations try hard to choose the most reasonable option; whether it leads to danger is another matter.

Our research can help enhance the safety design of buildings, transport terminals and general evacuation protocols. In the meantime, it’s reassuring to know people will more or less rely on their rationality in emergency situations.