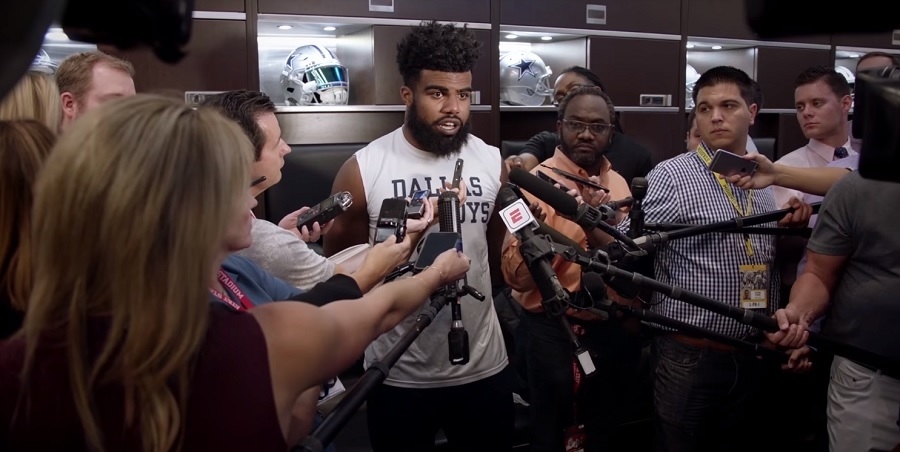 NFL running back Ezekiel Elliott in the official trailer of “All or Nothing: The Dallas Cowboys” | Photo by Amazon Prime Video/YouTube screenshot

Dallas Cowboys running back Ezekiel Elliott is confirmed to have tested positive for COVID-19. He is, however, not happy with the way the news came out and implies on Twitter that his rights may have been violated.

Just as the league and the NFL Players Associations are hashing out details for the start of the training camps, possibly in July, the week opened with reports that several players from Dallas Cowboys and Houston Texans tested positive for COVID-19. So far, Elliott has been the only one identified in the reports.

Elliott responded with a tweet on Monday that only says, “HIPAA ??” The NFL star is referring to the Health Insurance Portability and Accountability Act of 1996, which protects the privacy of an individual’s medical and health information, especially when releasing details without the patient’s consent.

The three-time Pro Bowl player’s tweet is likely an objection to the fact that his COVID-19 status was announced through a leak to the press. While HIPAA violations can lead to criminal penalties, it should be noted that its provisions only apply to healthcare professionals and clearinghouses as well as health insurers. If it would be proven that the information originated from a member of any NFL medical team, then Elliott can invoke his rights under HIPAA.

#Cowboys star RB Ezekiel Elliott is one of the players who has tested positive for the Coronavirus, his agent Rocky Arceneaux confirmed to me. Arceneaux said Elliott is feeling good.

NFL Network’s Ian Rapoport broke the news Monday without naming anyone at first stating, “Several Cowboys players & several Texans players have tested positive for COVID-19 recently.” In a follow-up tweet within an hour, he identified Elliott as one of those players and added that it was confirmed by the running back’s agent Rocky Arceneaux.

Some fans responding to Elliott’s online posts suggested that he set the record straight with his agent, in reference to Rapoport’s report. This prompted Elliott to fire another tweeting insisting that his agent “only confirmed” what “was already written.”

Fans replying to Rapoport and Elliott’s tweets have shared their get-well wishes for the NFL players. Others, however, reminded him of the controversy that took place in April when he allegedly attended a gathering with 30 guests along with his teammate and Cowboys quarterback Dak Prescott.

Texas was placed under strict stay-at-home guidelines at the time due to COVID-19 prohibiting social gatherings. However, Prescott later denied it was a party and maintained it was just a “home dinner” attended by less than 10 persons.