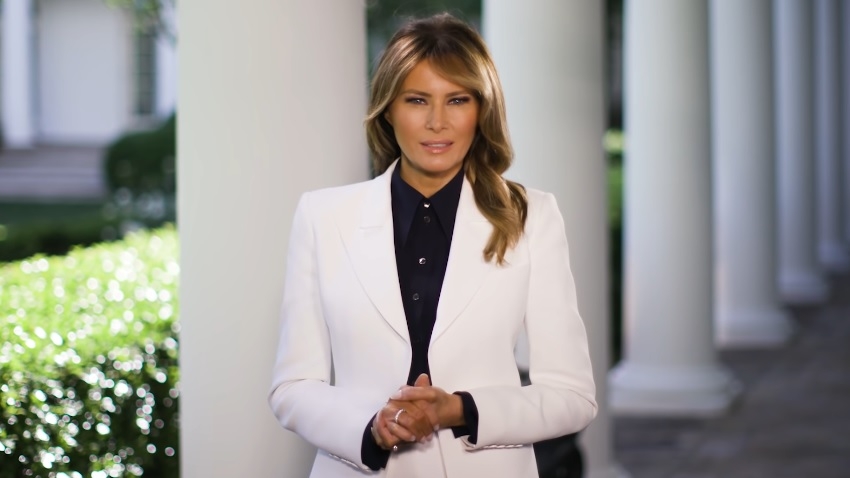 US First Lady Melania Trump in a video message for National Nurses Day in May 2020 | Photo credit: The White House / YouTube screenshot

Several books claiming to have insider scoops about the Trump family have been published since they moved to the White House. However, Pulitzer Prize-winning Mary Jordan’s new book on Melania Trump is a refreshing take on the first lady suggesting she is not the unwilling participant of her husband’s administration as portrayed by many.

Did Melania Trump really cry on the night of the 2016 elections?

Melania Trump rarely appears on interviews, and it might have only fueled the public and the media’s curiosity about the first lady. One of the most interesting claims made about her was that she was not on board with her husband’s political endeavors. The months it took for her to move from New York to Washington, D.C. may have further sparked those speculations. However, Jordan’s “The Art of Her Deal: The Untold Story of Melania Trump” offers a very different take on the former model’s involvement in Donald Trump’s campaign and presidency.

Michael Wolff reported on New York Magazine in 2018 that Melania Trump cried unhappy tears when it became clear that Donald Trump will defeat Hillary Clinton. A year before that, a source of Vanity Fair claimed the first lady did not want to be in the White House. However, Jordan refutes those claim, per the Guardian, “No one has seen Melania cry about anything.”

As for Melania Trump’s willingness to participate in Donald Trump’s administration, Jordan’s book claims otherwise as well. The first lady was reportedly one of the people that encouraged her husband to run for office as well as influenced his decision to choose Mike Pence as his running mate in 2016.

Melania Trump has also been one of the outspoken members of the White House against family separations at the US-Mexico border following her husband’s “zero tolerance” immigration policy. The first lady called the images of parents seeking asylum being detained away from their young children as “unacceptable” in an interview with ABC News. And, unlike many critics would like to believe, Jordan reports, “Melania reads a lot. She’s hyper aware. She’ll be the one that will put a political article in front of Trump and say: look at this.”