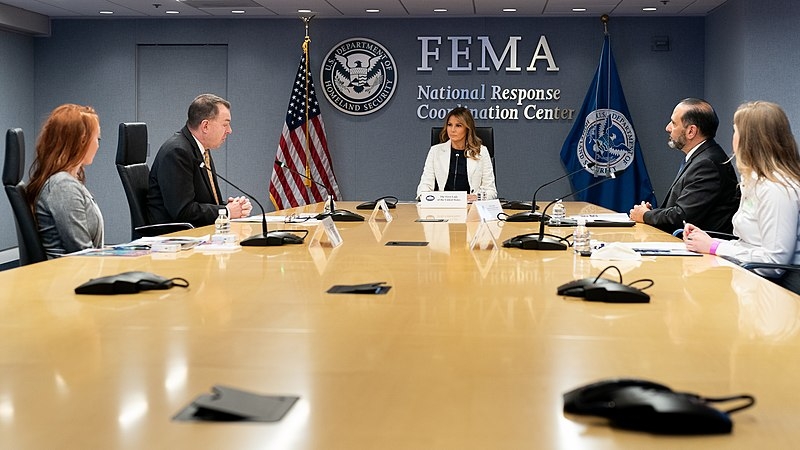 This week marks Juneteenth, a significant day for African-Americans in the country as it was the day slavery was abolished. First lady Melania Trump went on a tour of the National Archives to view the historic documents.

According to the official White House statement, Melania went on an unannounced tour of the National Archives alongside Secretary of Housing and Urban Development Ben Carson, one of the few African-Americans in the Trump administration. Archivist to the United States David Ferriero and Assistant to the Archivist Maureen MacDonald were also present during the tour.

The first lady viewed the Charters of Freedom and the Emancipation Proclamation, starting off with the Charters of Freedom that make up the three founding documents of the United States: the Constitution, Declaration of Independence, and the Bill of Rights. Mrs. Trump and Secretary Carson also viewed the 13th and 19th Amendments, the 1965 Act that resulted in the establishment of the Department of Urban Housing and Development and General Order Number 3, which was proclaimed on June 19, 1865, two and a half years following the Emancipation Proclamation of Abraham Lincoln.

“The National Archives is a treasured sanctuary for the written word and a monument to the principles of liberty, justice, and equality for all. During our country’s long march towards freedom, the Emancipation Proclamation and the Charters of Freedom continue to reaffirm our country’s democratic ideals and values that have inspired me and all Americans to this day,” said Melania in the statement.

Her visit also comes at a time when the Supreme Court ruled against her husband Donald Trump’s push to end DACA, the program that provides protection to 700,000 young immigrants from getting deported.

Meanwhile, the new book about the first lady, The Art of Her Deal: The Untold Story of Melania Trump appears to shed more light on her marriage to the president. In the book, which was based on 100 interviews, the Trumps’ former housekeeper Victoria Morales referred to their marriage as “strange.”

Morales recalls that even though they live in the same house with their only son, Barron Trump, they supposedly do not interact with each other. Whenever they are at the golf club in Bedminster, Donald Trump would spend the entire day playing golf. After golf, he would go to the clubhouse for lunch and dinner. Morales also added that even in New York, they do not share a bedroom.