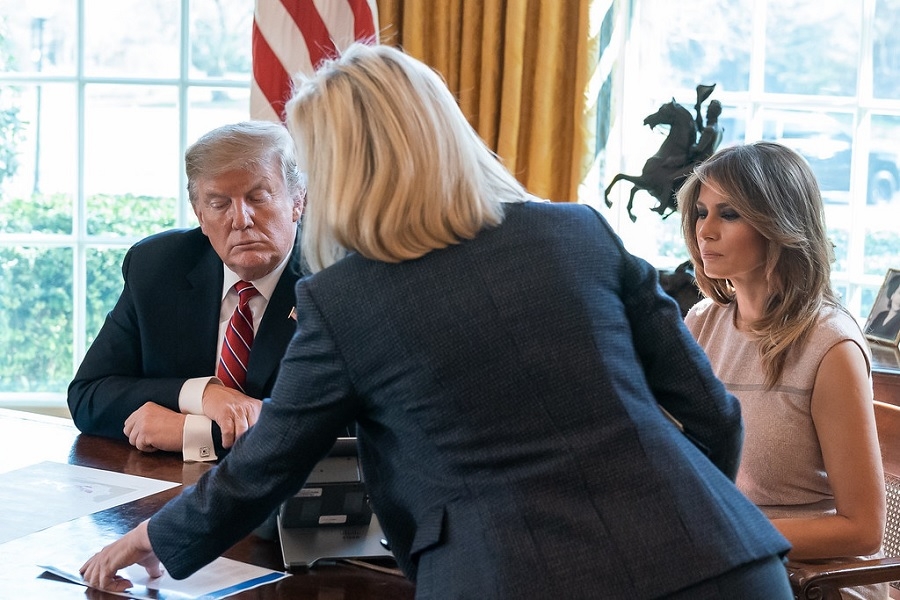 The past weeks have been hectic for the Trump administration, especially after an impeachment inquiry has been officially launched in the Congress in late September against President Donald Trump. Meanwhile, it is hard not to notice that First Lady Melania Trump has yet to comment on her husband’s latest political challenges.

Mrs. Trump was last seen with her husband at the United Nations General Assembly in late September. Since then, FLOTUS has practically been following her own busy schedule while the President gets entangled in more political issues after he decided to withdraw US troops from Syria, and a judge dismissed his petition to stop a subpoena of his tax returns.

Last week, Mrs. Trump was far away from the capital when she visited the Grand Teton National Park in Wyoming for the first time since they occupied the White House. On Monday, linked with her Be Best campaign, she graced the launching of the Red Ribbon Week at the Drug Enforcement Administration headquarters in Virginia, where she gave a five-minute speech.

A wonderful Red Ribbon rally at @DEAHQ this AM. Schools are getting ready for #RedRibbonWeek beginning on 10/23. We honor the many law enforcement agents who keep our communities safe & celebrate the students who pledged to live drug free lives today! #BeBest #DEARedRibbon pic.twitter.com/7eR6wWbprk

Mrs. Trump’s talk was focused on reiterating her commitment to fighting the opioid crisis and reminding her followers of her anti-vaping sentiments. Nowhere in her speech did she mention anything about the impeachment inquiry. Washington Post describes the First Lady’s recent activities as an “unusually packed schedule” but reports that Mrs. Trump maintains her choice of not entertaining questions from the press covering the events she attends.

While the First Lady remains mum on the issues challenging her husband’s presidency, Ivanka Trump has since given a rebuttal to the ongoing impeachment inquiry. “I think everything’s a question of priorities,” Ivanka said. “We have our priorities in the White House.”

The American president has given his critics another huge reason to question his policies. This week, he suddenly decided to pull out US troops from the Turkey-Syria border, leaving their Kurdish allies virtually vulnerable to retaliation of Turkish forces.

The decision was announced reportedly after Trump’s phone call with Turkish President Recep Tayyip Erdogan. Now, Trump is getting backlash even from his trusted Republican allies such as Sen. Mitch McConnell, who agreed that the President’s move only favors Russia, Iran, and Syrian President Bashar al-Assad.