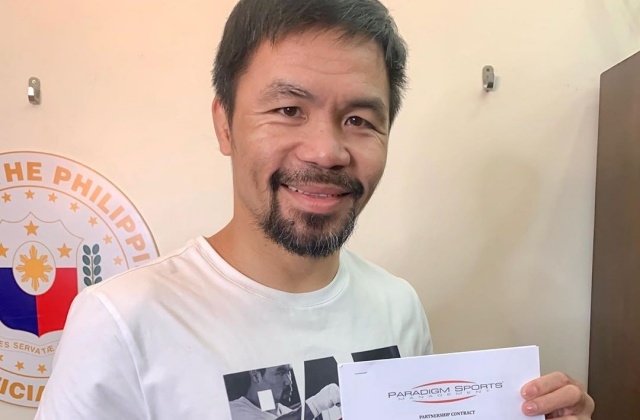 Manny Pacquiao just signed with Paradigm Sports management agency this week. The contract signing was held at the Filipino boxing champ’s home in General Santos City and the other party was also present albeit remotely.

Paradigm Sports is also home to MMA superstars Conor McGregor and Cris Cyborg and with that said, the talks about Manny Pacquiao and the 32-year-old MMA champ has soared again.

The California-based sports management agency also managed soccer and football players aside from those in the combat sports field.

Manny Pacquiao himself confirmed that he is now included in the roster of Paradigm Sports by updating his Instagram with a photo of himself showing a signed copy of the contract. The picture was posted on Oct. 12.

Boxing fans who want to see the fight between the Filipino boxing champ and Conor McGregor are now convinced that this match finally happen next year. The deal could push through since they are now in the same agency.

Prior to Pacman’s contract signing with Paradigm Sports, there were reports that say the deal for the fight is already being negotiated. Although MP Promotions seems to deny the match, there’s a big chance now that the deal will be done.

Conor McGregor also stated before that his battle with Manny Pacquiao is pushing through and they may meet in the ring not in the U.S. but in the Middle East. Then again, it should be noted that this is just Pacman signing with Paradigm and the match with Conor is not yet confirmed.

Meanwhile, Yahoo Sports reported that Conor McGregor stated that his upcoming match with Dustin Poirier is already a preparation for his match with Pacman. This means that the MMA fighter is hitting two goals with the MMA fight with Poirier.

The first is to have a match with him in MMA and second is to face Pacquiao in the boxing ring for a bigger payday. Poirier said that this is McGregor's master plan.