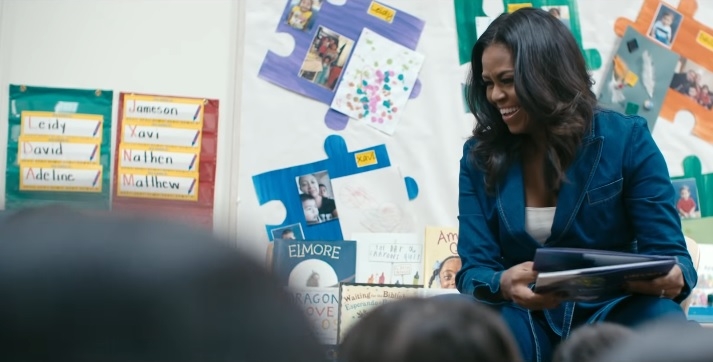 From the official trailer of the documentary “Becoming” | Photo credit: Netflix / YouTube screenshot

Michelle Obama’s “Becoming” is now more than just a book as a same title documentary recently dropped on Netflix. One of its highlights has to be the rare interview with her now-grown-up daughters Malia and Sasha.

The said documentary feels like a sequel to Mrs. Obama’s memoir where she narrated her life story from childhood through becoming the first African American First Lady of the United States. The movie also features sit-down interviews including that of Malia and Sasha, who almost never appeared in the media while they were still at the White House.

Malia and Sasha, now 21 and 18 years old, open up about what they hope for their mother as they move on from the White House. The younger Obama, said she is excited to see her be proud of what she has accomplished. “I think that's the most important thing for a human to do is be proud of themselves,” she added.

“No longer facing that same scrutiny, being able to let all of that leave your mind, creates so much more space,” Malia said. The movie then cuts to several footage of Mrs. Obama having fun with her brother, laughing hard while watching a video on a phone, and singing and dancing with her staff.

The elder Obama daughter also appeared in an earlier part of the documentary. She visited her mother backstage, saying, as she entered the room, that the speaking tour made her cry again. Malia said witnessing how people responded to Mrs. Obama’s event was proof that “those eight years weren't for nothing.” She added that people showing up proved they “really believe in love and in hope and hope in other people."

In several points of her speaking tour, Mrs. Obama also shared on-stage some interesting details about parenting two young daughters in the White House. As people would have imagined, there are White House staff members assigned to do chores for the First Family. But it was not something that Mrs. Obama liked for the growing Malia and Sasha.