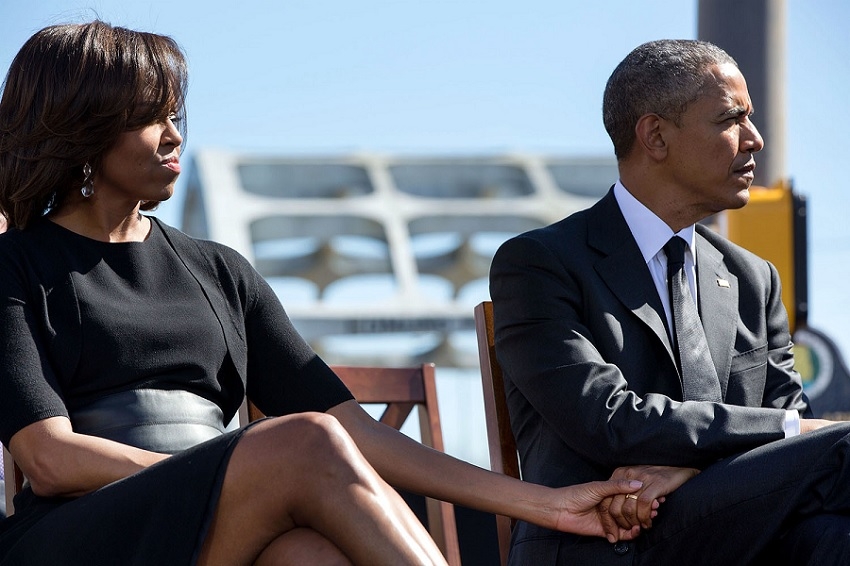 Michelle Obama and Barack Obama hold hands during the commemoration of the 50th anniversary of Bloody Sunday and the Selma to Montgomery civil rights rallies in March 2015. | Credit: Official White House Photo by Pete Souza (Public domain) via Wikimedia Commons

Former United States First Lady Michelle Obama obviously talks highly of her husband, Barack Obama, but she recently shared the one way he helped change her life. The answer might surprise some of their fans.

If there is one thing fans learned about Michelle Obama from her best-selling memoir “Becoming,” it is that many life experiences and people influenced the type of person she is today. However, she still believes that Barack Obama is the one person who changed her life.

“Before I met Barack, I was all about checking off the next box—law school, law firm, nice car,” Michelle Obama told Oprah Magazine. “But he taught me the art of the swerve, how to take life as it comes, and follow your passions wherever they lead.” The mother of two participated in the publication’s Visionaries series, where she answered 20 questions as part of the magazine’s 20th anniversary special issue in May.

She also dedicated other answers to her family. For one, when asked about the one thing she did in life that makes her happy, the Grammy winner said it was getting married and having kids. Michelle Obama went on to describe that her life with her husband and daughters has been a “great advent.” She also expressed how proud she is for raising their “brilliant, bold young women” with Barack Obama.

Michelle Obama honored her mother, Marian Robinson, in the Q&A, saying she is her hero. Robinson lived with them at the White House and has been praised by the Obamas in several interviews for how she helped in raising their daughters, Malia and Sasha, who were just 10 and 7 at the time. In earlier interviews, ex-FLOTUS revealed that Robinson made sure her granddaughters stayed grounded and even taught them how to do their own laundry.

Over the years, you've probably seen Michelle's mom, Marian Robinson, in photos with our family at inaugurations,...

The former President also has a good relationship with his mother-in-law. In a Facebook post last July for Robinson’s birthday, Barack Obama wrote that people do not see much of how Robinson has been there for them every day.