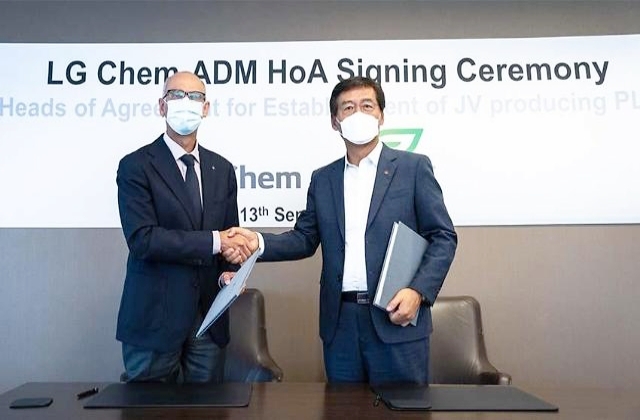 LG Chem announced on Tuesday, Sept. 14, that it has teamed up with Archer Daniels Midland for a joint venture to produce bioplastic made with corn. Starting in 2025, the Korean chemical company and the Chicago, Illinois headquartered food processing and commodities trading corporation are aiming to produce 75,000 tons of corn-based bioplastic a year.

The Korea Herald reported that although the press release was posted on the said date, the agreement was actually signed earlier, on Monday. The two firms are set to launch their venture in the United States within the first quarter of 2022.

They will be manufacturing corn-based lactic acid and poly lactic acid (PLA) bioplastic that is commonly used for food packaging, clothing, upholstery, and disposable silverware. An LG Chem official said that with the project, the company became the first Korean firm to build a PLA factory in the U.S.

The company’s vice chairman and chief executive officer, Shin Hak Cheol, said that its partnership with ADM marks the beginning of a new journey toward a sustainable business for the good of the environment and society.

The deal between LG Chem and ADM will allow the former to obtain a strong supply of raw materials and speed up its effort to commercialize bioplastics to help curb plastic waste and contribute to addressing climate change.

Aju Business Daily mentioned that the corn-based raw materials for producing bioplastics are made from agricultural by-products and used plastic bottles. These are eco-friendly materials that naturally decompose in several months due to microorganisms.

In any case, PLA is a biodegradable plastic that is made through fermentation and refining of glucose that were extracted from corn. LG Chem is joining forces with ADM that has technical expertise in the production of such glucose which is the most important raw material for the corn-based bioplastic.

"The establishment of a joint venture with AMD will be the start of a new journey that goes beyond simple cooperation to lead the transition to a sustainable business structure for the benefit of the environment and society," LG Chem CEO Shin Hak Cheol said in a press release. “We will continue to actively seek out new ways to contribute to carbon-neutral growth as a leader for sustainability.”