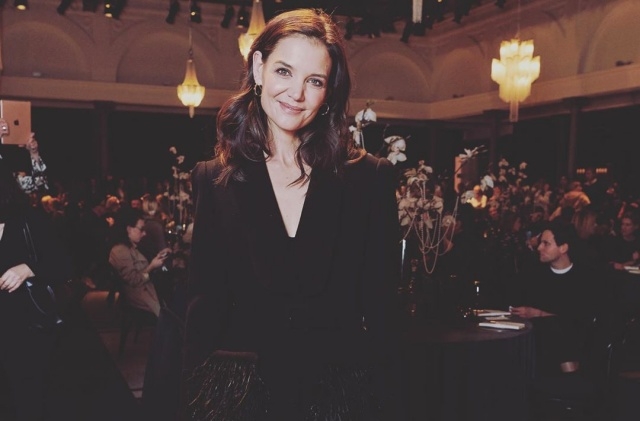 Katie Holmes is single again after parting ways with her long-time boyfriend Jamie Foxx. Since becoming officially “available,” she was only linked to two people so far. The first one is to her former fiance, Chris Klein and the second is Jennifer Aniston’s ex-husband Justin Theroux.

But the one that is making more noise is her dating rumors with Theroux and this is probably because they are exes of famous people. Justin and Katie Holmes are reportedly dating in secret and they usually go on dates in exclusive restaurants in New York.

The tabloids are reporting that Katie and Justin started dating since they often bump into each other as they are living in the same city. The two are often very low-key when they dine out or go to bookstores to date and there are allegedly witnesses who shared that they look really in love.

As per New Idea, Katie Holmes and Justin Theroux don’t have to worry about anything especially after Jennifer Aniston allegedly gave her blessings for them to date. It was claimed that the pair’s relationship is serious enough that it prompted the actor’s ex-wife to give her approval.

The report is suggesting that the “Friends” star can see that her ex and his new girlfriend may get more serious now or later. They can potentially end up together too so she is letting go by giving her blessings.

The story was based on the accounts given by an unidentified source to New Idea so it cannot be trusted at once. Also, the magazine is trying to say that Theroux sought her ex-wife’s blessings to date Katie Holmes and this sounds odd and could lead to the conclusion that this is a fabricated story.

Furthermore, Gossip Cop contacted Katie Holmes’ side to get some comments about this news. The actress spokesperson confirmed that the news is false. In the first place, Katie is not in a relationship with Justin Theroux so Jennifer Aniston actually has nothing to approve or reject.

Finally, the publication added that Suri Cruise’s mom does not even know Justin personally. They may have seen each other but that would be in Hollywood events only like parties, gala and awards nights