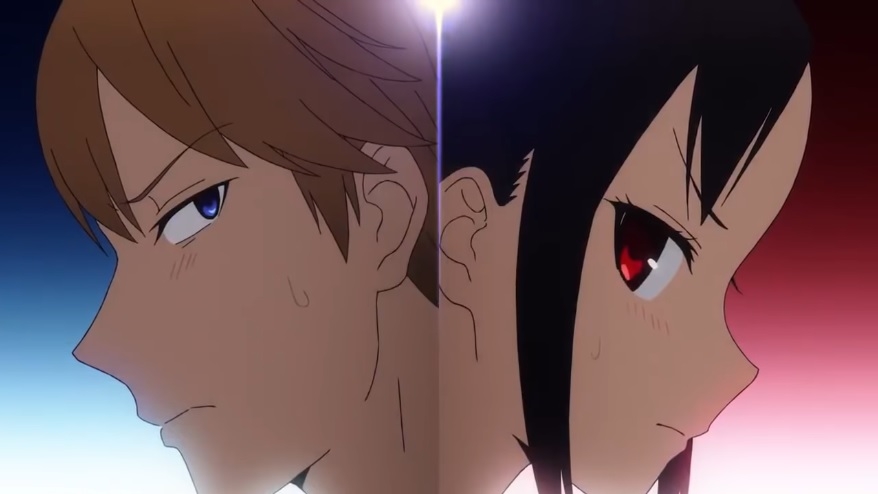 The complete scans of “Kaguya-sama: Love Is War” chapter 197 have leaked online. Thanks to fans who have translated the dialogues, it is now confirmed that Kaguya and Miyuki are going to be neighbors.

As previously reported based on early leaks, Papa Shirogane is seemingly having an issue with a stalker. Luckily, his YouTube career is going well enough allowing to move to a safer neighborhood and in a bigger house. The patriarch announces his decision to Kei and Miyuki in “Kaguya-sama: Love Is War” chapter 197 along with the monthly rent budget of 200,000円.

With that budget in mind, the Shirogane family will be able to move to a house with a 3LDK layout. That simply means having at least three bedrooms aside from the living room, kitchen, and dining room. Kei will be very excited because this means she is finally having her own room.

Miyuki searches for a house that fits those criteria along while also considering the proximity to Shuchiin. With these things in mind, Miyuki realizes in “Kaguya-sama: Love Is War” chapter 197 that the Minato area is one of their best options -- it is also where Kaguya lives. President immediately imagines how moving to Minato will allow him to spend more time with Kaguya outside of Shuchiin.

Miyuki’s house-hunting in “Kaguya-sama: Love Is War” chapter 197 will be interrupted by Chika. The secretary redirects Miyuki’s search by recommending places far from Minato, both in terms of distance and ambiance. Ishigami will realize that Chika is not really trying to help. Yu suggests she just does not want the Shiroganes moving to Minato because she might be thinking the social class of Miyuki’s family does not fit in neighborhood similar to Minato.

Kaguya and Miyuki are becoming neighbors

Luckily, Kaguya enters the student council room even before Chika accomplishes her latent intentions in “Kaguya-sama: Love Is War” chapter 197. When Kaguya asks what’s going on, Miyuki tells her they are moving to a new house likely somewhere near her. Kaguya then asks to visit Miyuki’s current house before his family officially moves.

‘Kaguya-sama: Love Is War’ chapter 197 release date, where to read

The scenes narrated above are from a leaked scan of “Kaguya-sama: Love Is War” chapter 197’s Korean version. Since finding an official digital per-chapter release of the manga is not readily available online, fans may want to check this out. Just note that the leak comes with a rough English translation.

A cleaner translation of “Kaguya-sama: Love Is War” chapter 197 should become available from the usual sources. But the best way to catch up on the latest chapters of the series is by supporting its official volume releases usually set every three months.