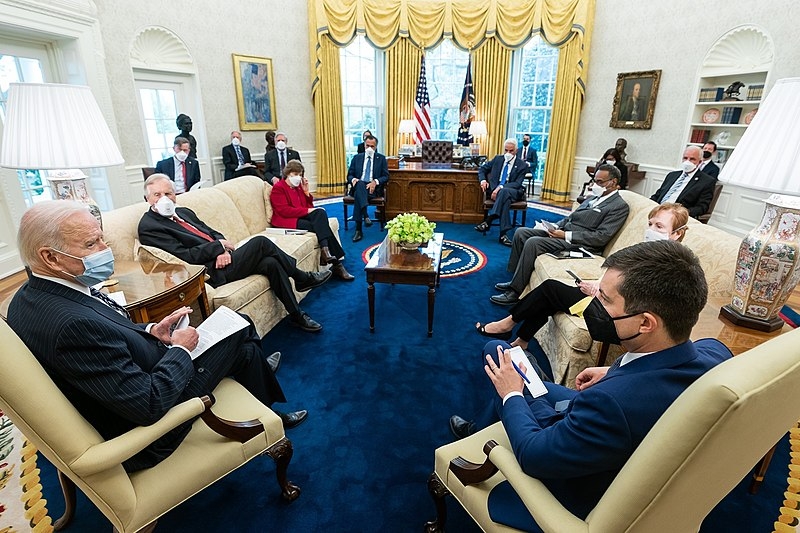 As the American Rescue Plan passed solely on party lines to be signed into law, President Joe Biden is looking for a more bipartisan approach to his next major proposal for infrastructure. Biden is set to resume infrastructure talks with Republican Senator Shelley Moore Capito this week.

Biden is set to meet with Capito at the White House on Wednesday as both parties push to develop a final bipartisan infrastructure plan. Biden and Capito will attempt to resolve disputes over the scope of the infrastructure plan and how the government should fund the investments. This follows the GOP’s counterproposal of a $928 billion plan that does not include Biden’s priorities for care for elderly and disabled Americans or upgrades to houses and schools.

The counteroffer falls short of Biden’s previous $1.7 trillion proposal made to the Republicans. It has yet to be determined what both sides would accept as a compromise in an effort to upgrade the country’s roads, bridges, airports, broadband access, and utilities, among other aspects.

The upcoming meeting also follows talk amongst the Democratic party of whether the bipartisan effort to pass the infrastructure proposal could work or if the party should pass the proposal along party lines again. Senate Majority Leader Chuck Schumer told the Senate Democratic caucus that they would write an infrastructure bill with or without the support of Republicans when they return to Washington this month.

Over the weekend, Transportation Secretary Pete Buttigieg said he wants to see progress in the talks by next week, telling CNN that the negotiations cannot be prolonged.

Meanwhile, Biden called out two Democratic Senators Tuesday as he explained why he has yet to implement the ambitious parts of his administration’s agenda. Biden noted the slim majorities the Democratic party holds in both the House and the Senate, the upper chamber being evenly divided. Biden answered critics as to why he has not been able to get the sweeping voting rights proposal passed during his remarks commemorating the Tulsa race massacre.

“Well, because Biden only has a majority of effectively four votes in the House, and a tie in the Senate -- with two members of the Senate who voted more with my Republican friends,” said the president, referencing Arizona Democrat Kyrsten Sinema and West Virginia Democrat Joe Manchin, whose stances on the filibuster leave Democrats frustrated.