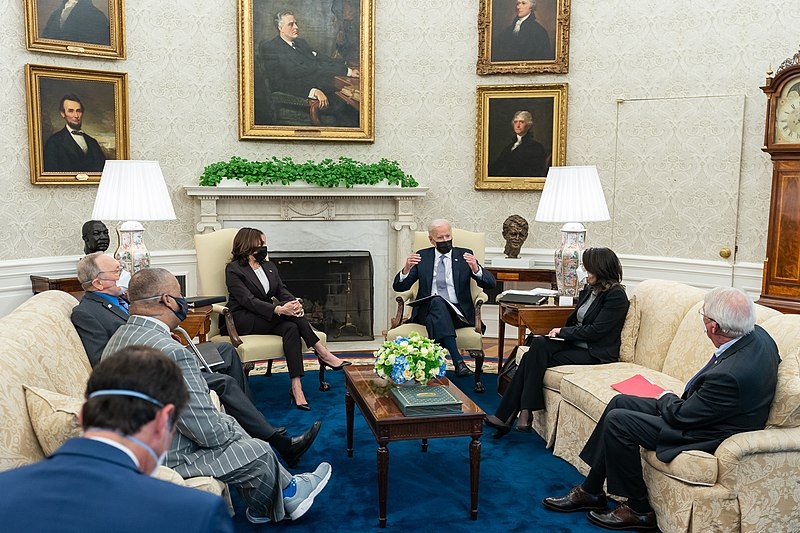 With an evenly divided Senate, party unity especially in the Democratic Party is essential in President Joe Biden’s administration. Ahead of the Senate’s vote on debating the sweeping voting rights proposal, Biden met with key Democratic lawmakers, Joe Manchin and Kyrsten Sinema.

A White House official told CNN that Biden held private meetings with Sinema and Manchin Monday. Manchin and Sinema are also key players in the passage of his trillion-dollar infrastructure proposal. Both proposals for voting and infrastructure have garnered opposition from Republicans in both chambers.

Both Manchin and Sinema are seeking bipartisanship in the two proposals, and are part of the group of 21 Democratic and Republican lawmakers that are currently in discussions with Biden over the infrastructure plans. Sinema spoke with the group following her meeting with Biden.

“The president thanked each senator for their engagement toward making historic investments in economic growth, middle-class jobs, and the clean energy economy, and told them he was encouraged by what has taken shape but that he still has questions about the policy as well as the means for financing the bipartisan group’s proposal,” said the official.

The aspect of funding the infrastructure bill remains up for debate. Biden has opposed increasing the gas tax to inflation and applying user fees to electric vehicles. Both suggestions were made by the bipartisan group.

Nevertheless, the Biden administration’s team to lead discussions on infrastructure are set to resume talks at the Capitol Tuesday regarding the status of the bipartisan proposal. Biden’s team has been in constant communication with the group.

Meanwhile, Biden is also pushing the efforts to curb the rising rates of violent crimes nationwide, targeting gun violence most especially, according to the Associated Press. This comes as administration officials have expressed concerns that violent crimes may increase in the coming summer season. The concerns over the crime rates appear to be fueled by the pandemic that has led to economic hardship, as well as anxiety and displacement among the public.

While Biden has opposed the slogan “Defund the Police,” he has also been boosting the efforts of progressive Democrats of police reforms. Biden is set to unveil several executive orders this week that seek to reduce violence and reiterate his calls for Congress to pass gun reform legislation. Prior to his remarks, the DOJ has announced the creation of strike forces to address gun trafficking in several cities.