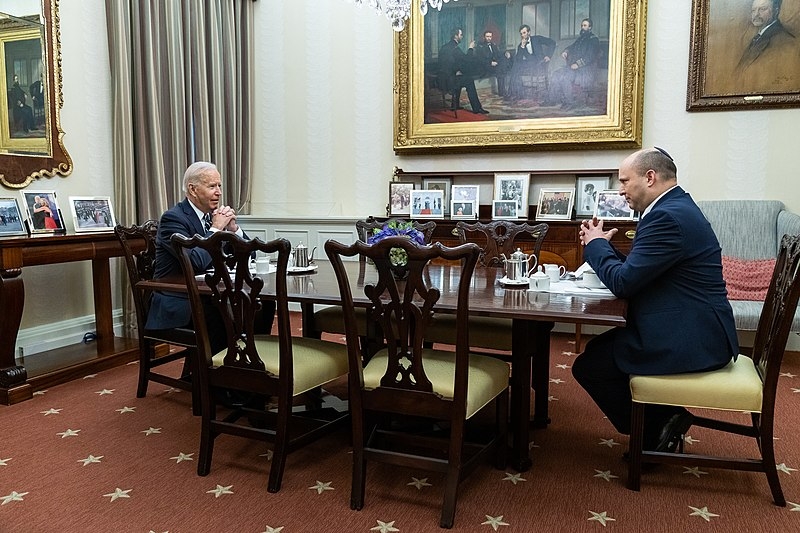 A manipulated video showing US President Joe Biden seemingly falling asleep during his meeting with the new Israeli Prime Minister Naftali Bennett made the rounds on right-wing social media. The manipulated video also appeared to have made its way to former Israeli PM Benjamin Netanyahu.

Axios reports that Netanyahu appeared to take a swipe at Biden by imitating the manipulated video of him during a live broadcast on Facebook. The outlet explained that Netanyahu’s party, the Likud Party, posted the video edit of Biden. The video was widely debunked but has nevertheless gone viral in Israel, particularly among supporters of Netanyahu.

However, Twitter flagged the video as “manipulated content” but Netanyahu appeared to continue to promote the false story over the weekend. “I heard Biden was very attentive to what Bennett had to say,” said the former Israeli PM. “...He dropped his head in agreement.”

Netanyahu was later called out for promoting the false video, to which he responded by blaming the media for manipulating the picture, saying that he never said anything about the US leader. The Likud party also released a statement to clarify the situation, saying that Netanyahu was taking a shot at his successor rather than Biden.

“Former Prime Minister Netanyahu knows and cherishes President Biden as a friend of Israel for 40 years. His criticism was directed only at Naftali Bennett who spoke at length about nothing during his visit to the White House,” said the party according to Axios.

Meanwhile, Biden is looking to use his address at the UN General Assembly this week to assure other nations that American leadership has returned to the global stage while calling on allies to take immediate action and cooperate to address the issues such as the ongoing COVID-19 pandemic, climate change, and human rights abuses.

Biden arrived in New York Monday to meet with UN Secretary-General Antonio Guterres ahead of his address on Tuesday. In remarks before his meeting with the UN official, Biden reiterated “America is back,” the mantra that means the promise to re-engage with allies and partners following his predecessor’s administration that saw strained ties between the US and its allies and partners.