Jennifer Aniston: Brad Pitt signs up at the Fast Times table read after ex-wife confirmed her participation; Ex-couple admitted they were nervous 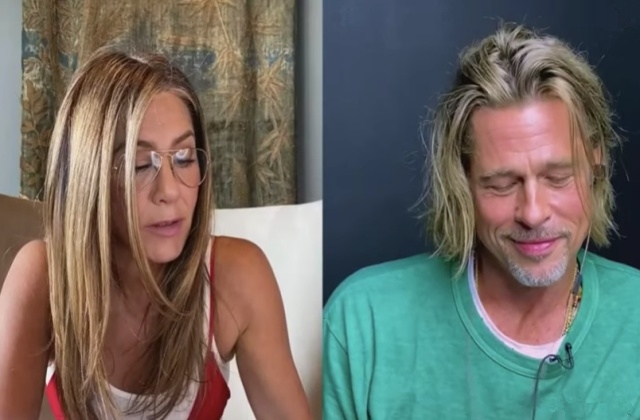 Jennifer Aniston and Brad Pitt took part in the fundraiser activity set up by Dane Cook. He organized the “Feelin A-Live: A Virtual Table Read Of Fast Times at Ridgemont High,” and it was a huge hit after raising over $50,000.

The main attraction of the event was, no doubt, the reunion of Jennifer Aniston and Brad Pitt, who were once married and called the “Golden Couple” in Hollywood. Fans around the world were thrilled in the amazing premiere of the table read that also starred other A-list celebrities.

How the reunion of Brad and Jen went

Before the table read happened, Dane Cook shared how he gathered the stars for the epic reading. In the “Better Together with Maria Menounos” podcast, he admitted that he must invite big names for the success of the fundraising event and shared a story when he was trying to recruit Jennifer Aniston.

"When I text Jennifer, she was - I'm not trying to make it more fluffy - she could not have been more delightful, game, excited," Hello Magazine quoted Dane as saying. "Again, I knew once those first few names were in there, when Brad Pitt...started coming in, I was like, 'Yes! This is going to happen.'"

Dane explained that Jen was the first to sign up, and Brad Pitt agreed after the “Friends” star confirmed her participation. He added that casting the exes was hassle-free, and there was no drama, the two were game.

"They both locked in,” Dane said. “What you saw was absolutely what we had hoped, which was just a nice engagement between two massive, incredibly talented people!"

During the table read, Jennifer Aniston and Brad Pitt’s scene sent fans screaming. They acted out a scenario when the actress had to seduce her ex-husband’s character.

"Hi Brad," Jen said in a seductive voice. "You know how cute I always thought you were. You're so sexy. Will you come to me."

Prior to this, when the stars just arrived for the virtual reading, the two greeted each other. Brad calls her by her surname, so she followed suit. "Hi Aniston," he said and Jen replied with "Hi Pitt." At one point, Jennifer Aniston called Brad “honey.”

In any case, Jen and Brad admitted they were nervous in heir on-screen reunion, but they immediately settle when the event took off. Later, they revealed they enjoyed themselves.

As per US Weekly, body language expert Tonya Reiman shared that Jennifer Aniston seems to have some “hidden thoughts” in the video. Insiders also relayed to the magazine that these days, Brad and Jen’s friendship are more comfortable and better than ever.

“It used to bug them how everyone pulls for them to get back together, but now they laugh it off,” the insider said. “The truth is they have each other’s backs.”