Inside the story: The Merger - a sports film as a vehicle for social change 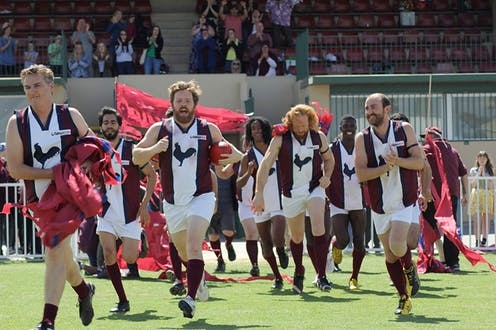 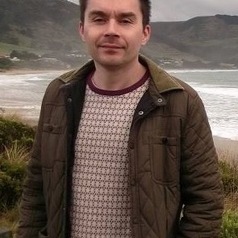 Why do we tell stories, and how are they crafted? In a new series, we unpick the work of the writer on both page and screen.

Set against the political backdrop of Australia’s refugee policy and the racism it generates, Mark Grentell’s The Merger (2018) uses the genre of the sports film to explore – and ultimately challenge – the attitudes around this hotly contested topic.

Adapted from a comedy play of the same name, written by and starring Damian Callinan (also in the film), The Merger draws on the tropes we expect of the sports film – world, character, structure, theme – to tell a poignant, and important, tale of how a struggling Aussie Rules footy team (The Roosters) in an equally struggling town (Bodgy Creek) learns to accept people for who they are and what they can offer a community.

Structurally, a hallmark of the sports film is its dramatic shape as a rites-of-passage rite of passage?. A protagonist faces a problem and grows out of it, becoming a new person who is able to prove their value to the world. The dramatic goal of winning a game or tournament represents triumph for the protagonist, and the team or town.

In The Merger, Troy (Callinan) – a disgraced local blamed for the town’s decline (he led a protest to close down the timber mill, leading to mass job losses) – is drafted in by naïve teenager Neil (Rafferty Grierson) to help The Roosters improve their game – literally and, as we come to learn, morally.

As in many sports films, Troy – who functions as the protagonist of the story and also the team’s mentor – is a former brilliant footy player, meaning he has both the credibility and respect (albeit lost) of someone who knows how to do things. This allows him to give advice that, while falling on deaf ears initially, will eventually save the day.

Troy is also given a chance for redemption – a second go at saving the town he allegedly destroyed. Not surprisingly, Troy’s character arc sees him invited back into the community. A mirror to the core thematic story of accepting refugees, this storyline sees Bodgy Creek’s residents understand and forgive his past and value him for who he is now.

The structural and thematic connection between Troy and Neil is important to note here. The son of “leftie” Angie (Kate Mulvany) – whose father-in-law, Bull (John Howard), happens to be The Roosters’ president (and a racist) – Neil is young, naïve and innocent. To him, Troy is just a man who has the skills The Roosters need – so why are people being so nasty to him?

Thematically, then, just as we are asked to consider the perspectives of refugees, Neil also sees Troy for what he is – no baggage, no prejudice. 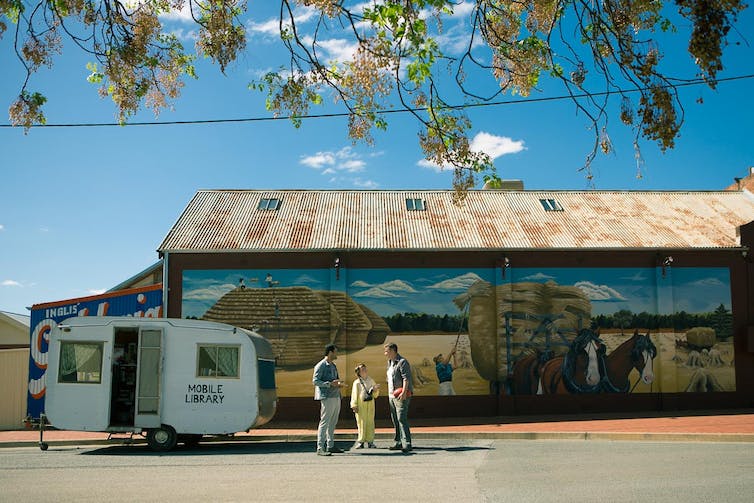 Structurally, Neil provides the initial “call to adventure” for Troy, willing him into the story. Archetypally, this is an expected part of a film’s structure, setting the story in motion with a dramatic question or challenge – in this case, to come back to the sport.

Neil’s mother runs a local refugee centre, and it is through this that The Merger’s story really begins. A grant scheme to employ refugees is suggested as a way of finally getting the clubhouse fixed up. (It’s condemned with asbestos – a nice thematic nod to the notion of poison and rot.) Here, the film’s title is used to punctuate the dramatic question of the story. The community is forced to think hard about the benefits of taking the refugee grant – do you want to merge, or do you want to fold?

In terms of story world, the setting of Bodgy Creek is important. A former award winning “tidy town”, it is now brimming with rubbish and morale is at an all-time low. Here, world is used purposely to reflect the film’s central theme – a place where people have given up on not only themselves, but also on each other.

This is typical of the sports film, where the team or town as world is in dire need of a change – that will be brought about by sport. Even if the final tournament isn’t won, the act of training for it and bonding – the team or town uniting as one – will triumph.

In screenwriting terms, this represents the narrative demand that something has to change – people, places, attitudes, values. In the sports film, the team and its desire for success (plot) reflects a deeper need for meaning and renewed hope (theme).

This is especially important for The Merger’s political context of refugees being settled in Australia, where footy – and by association, the town (its only hope lies in the team) – acts as a vehicle for bringing the characters together and teaching them (and the audience) about respect and reciprocity.

The sports film requires a range of characters to explore these tensions, which is why team members are used to give differing perspectives and attitudes. The openness and kindness of Troy, Angie and Neil in The Merger is contrasted by club president Bull, a racist and traditionalist who only learns to “see properly” through the team’s eventual success. 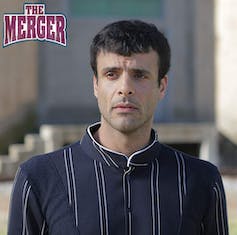 Loutish antagonist Carpet Burn (Angus McLaren) also represents the nasty, bigoted views of many Australians towards refugees. His character arc comes when he realises new (refugee) player Sayyid (Fayssal Bazzi) is a better player than him, and that if he wants the team to succeed, they need to join forces.

In all honesty, this conflict is a weak aspect of the film. There are not enough story beats (moments of physical and emotional character change) to warrant the arcs of Bull and Carpet Burn. They change too easily, not pushed dramatically enough for an audience to feel this shift is justified. But the sentiment is there, and we know what the film is trying to say.

With echoes of the British film Grow Your Own, which also tackles ideas of immigration, racism and perceived threats to “traditional” life, The Merger uses the tropes of the sports film to explore – in an entertaining and thus palatable way – contemporary attitudes towards refugees in Australia.

Perhaps a hallmark of many Australian films, mateship triumphs as we see the team and its players unite for the benefit of footy. Attitudes and beliefs are swept aside in favour of what, for many, lies at the core of a “fair go” Australian life.