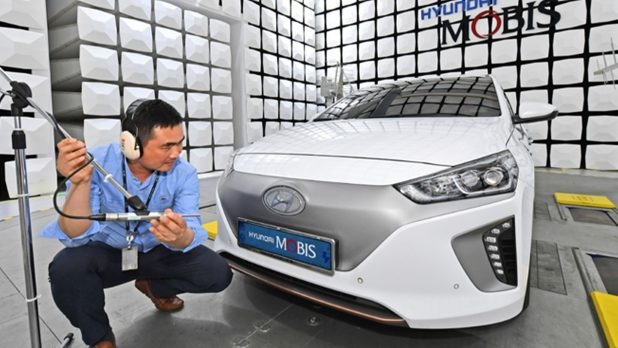 According to the findings, drivers who used M.Brain saw their risk of careless driving during after-meal hours, when drowsy driving is most common, drop by up to 30 percent.

Hyundai Mobis Co. has come up with an in-house brainwave-based driver monitoring system that can reduce the risk of drowsy driving by up to one-third.

The system, dubbed M.Brain, is a wearable earpiece that continuously detects and analyzes drivers' brain activity.

The company has examined the actual effect of the technology through a pilot study on public buses in Gyeonggi Province over the past year in partnership with the Gyeonggi Research Institute.

According to the findings, drivers who used M.Brain saw their risk of careless driving during after-meal hours, when drowsy driving is most common, drop by up to 30 percent.

M.Brain helped minimize the danger of careless driving by roughly 20% on highways where drowsy driving can lead to multi-car accidents.

When sloppy driving was detected in real-time, the device helped drivers recover attention within 2.3 seconds by blasting an alarm over the speakers and vibrating the seat.

This is nearly three times faster than the 6.7 seconds it took non-M.Brain drivers to regain attention.