Many commentators claim that President Donald Trump’s reaction to the mounting health crisis has been confused and incoherent. Despite this, the crisis has produced a “rally round the president” effect in public opinion.

The graph below tracks the average percentage of Americans in monthly Gallup Polls who approve or disapprove of the job Trump has been doing since his inauguration. Presidential approval ratings have rallied in the past when the US has faced significant crises. 9/11 was a good example, with support for President George W Bush, skyrocketing from 56% to 88% between August and October 2001. 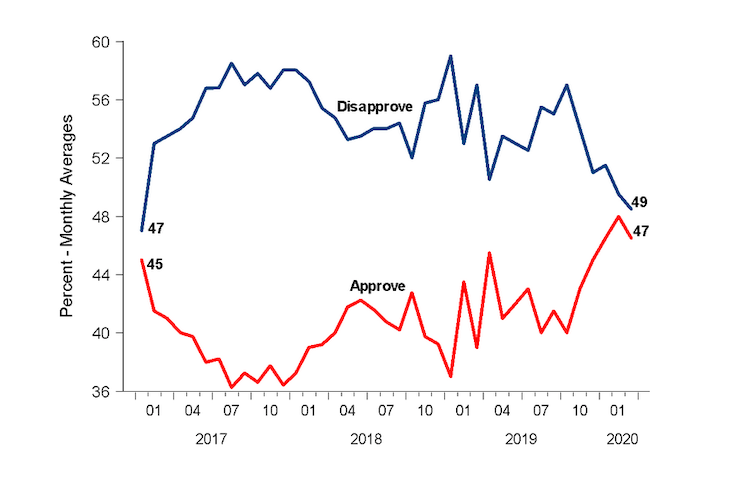 Following his inauguration in January 2017, Trump’s job approval ratings fell rapidly, and there was a gap of minus 22% between approval and disapproval by August of that year. His ratings then gradually improved only to crash again following the mid-term Congressional elections in November 2018 when the Republicans lost control of the House of Representatives to the Democrats.

Since the coronavirus pandemic emerged, public opinion has rapidly shifted and more Americans now perceive the virus as a serious threat to public health and the US economy, according to Pew Research Centre data. Despite this, Trump’s job approval ratings have improved in recent weeks with some polls giving him a positive net rating for the first time since his inauguration.

Does this mean that Trump will be re-elected in November on a wave of public endorsements of his handling of the crisis? Our statistical analyses suggest not.

Efforts to combat the coronavirus have sent the American economy into a tailspin, with 22.2 million people filing for unemployment in the four weeks since March 14. This is the highest number on record, far surpassing the previous high of 6.6 million unemployed in May 2009 during the depths of the great recession.

Our forecasting model is known as an error correction time series model which we used to analyse the relationship between the state of the economy and attitudes to Brexit in the UK over more than a decade. If we apply it to the task of modelling the relationship between Trump’s job approval ratings and consumer confidence in the US, his ratings will fall sharply by the time of the election if the economy continues to crash. This is illustrated in the graph below, where the red line is the forecast and the blue lines measure our confidence in it.

The forecast is based on the relationship between presidential approval and consumer confidence over 506 months going back to January 1978. Consumer confidence is measured using the Michigan Index of Consumer Sentiment, a widely used index of public attitudes about the state of the economy. A high score on the index means that Americans are optimistic about the economy and a low score that they are pessimistic.

The consumer confidence index fell sharply from 101 to 89 between February and March 2020. This is the fourth largest one-month decline in nearly half a century and recent Pew survey shows that 65% of Americans expect a recession or even a depression in the months ahead.

In our forecast we assume that a sharp economic downturn will occur, and that the consumer confidence index will fall to 55 in April, as it did in November 2008 during the financial crash. In December 2008, it recovered up to 60, but by February the following year it had fallen again to 56. Overall, the index is fairly volatile but the current sharp decline in the US economy is much more likely to make it fall rather than increase before this year’s election.

Our model assumes that if the index stayed at 55 until the November presidential election, Trump’s job approval would decrease to 37.2%.

Where Trump’s approval ratings could go 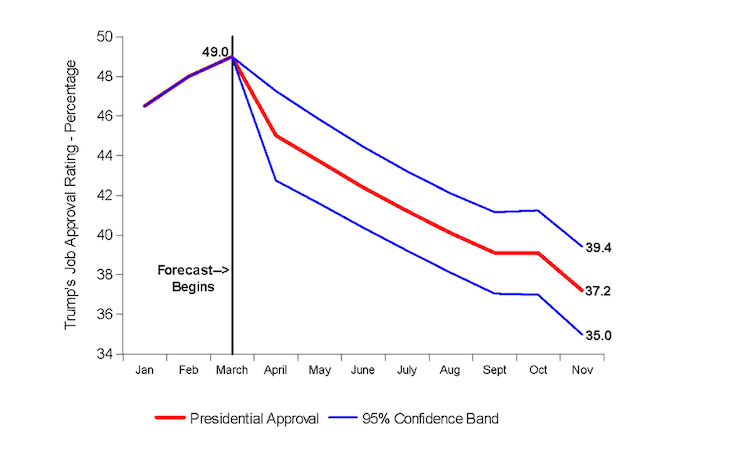 Our analysis indicates that when consumer confidence is high, Americans are optimistic and reward the president for his performance, and when it is low they become pessimistic and punish him. This relationship can be disturbed temporarily by events such as international crises and wars (which we take into account), but presidential approval and consumer confidence continue to track each other as the effects of such events gradually dissipate.

Consumer confidence does not need to be so extremely pessimistic for the president to be in serious trouble. Trump has a strong base of supporters and his approval rating has seldom fallen below 40% during his term in office. If most of these people continue to view his efforts positively and the consumer index falls only half as much (to 73 points rather than 55 until November), we predict Trump would get 43.7% of the popular vote and 181 electoral college votes – again a decisive defeat.

A third scenario underscores how the president’s re-election chances hinge on an economic recovery and the increasingly sanguine consumer confidence it would generate. If we assume that consumer sentiment follows a V-shaped path, falling to 55 in April but then gradually recovering to 101 in October (where it was in February), our model shows that Trump gets a slim majority – 50.9% – of the popular vote. This translates into 320 electoral college votes, and Trump’s re-election.

Taken together, these forecasts emphasise the importance of a healthy economy for Trump’s prospects of a second term. Clearly, he would be in serious trouble if there is a major erosion of consumer confidence. He won in 2016 with 46% of the popular vote, but only with extremely narrow victories in Michigan, Pennsylvania and Wisconsin. These manufacturing states of the so-called rust belt are likely to be hard hit by a protracted recession, so consumer confidence and the presidential approval ratings it generates could be even lower in such places than elsewhere.

The upshot is that while a number of Americans have rallied around the president in reaction to the coronavirus crisis, this may not last if the economy is in recession and consumer confidence plummets.