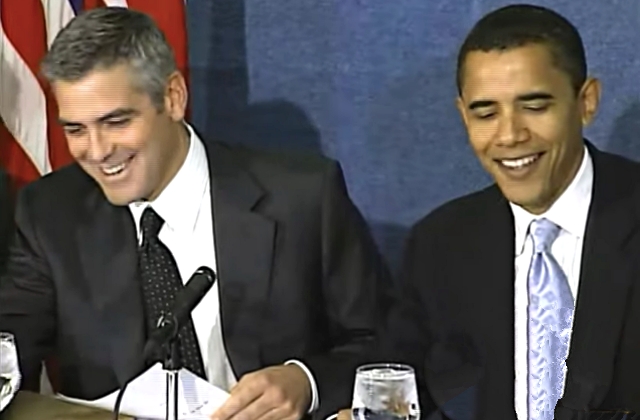 Photo by: The National Press/YouTube

Former president, Barack Obama, is reportedly trying to push his friend George Clooney to run for president this year. It was said that Michelle Obama’s husband asked the “Batman” actor to run for office when they visited him in his home in Lake Como villa.

Barack pressing George to run for president this year?

It was said that Clooney was originally planning to run for the presidential election in 2024, but Barack has been telling him to do it this year instead. “George has been privately despairing about the state of America and the world for a long time,” a so-called source told the magazine. “Becoming a husband and a father has finally prompted him to do something about it.”

George Clooney is a known activist and philanthropist who already worked on various projects and supported groups. This is why he has a strong background to be a candidate, and this is why Barack Obama believes he is a good fit for the position and willing to give his support if he decided to run.

Gossip Cop is debunking this news for many reasons. First, it pointed out that George Clooney already said many times before that he has no interest in becoming a president. In fact, he said in one of his interviews that for 20 years, he had been asked by people to run, but his answer has been the same, and it’s a “no.”

Also, the 59-year-old actor already ruled himself out of the 2020 presidential race in his country by saying that he does not have the skills needed to be a politician. He further said via BBC that he has no plans to go to the White House.

"I am not going to get into politics,” he said. It doesn't seem like a very logical place for me to be able to apply what skills I have. I don't have to make compromises for the things that I stand for and the things I believe in as politicians do. So it is not something that interests me."

Finally, Barack Obama already endorsed Joe Biden for the 2020 Presidential election in the U.S., so it is clear that he is not pushing for George Clooney.