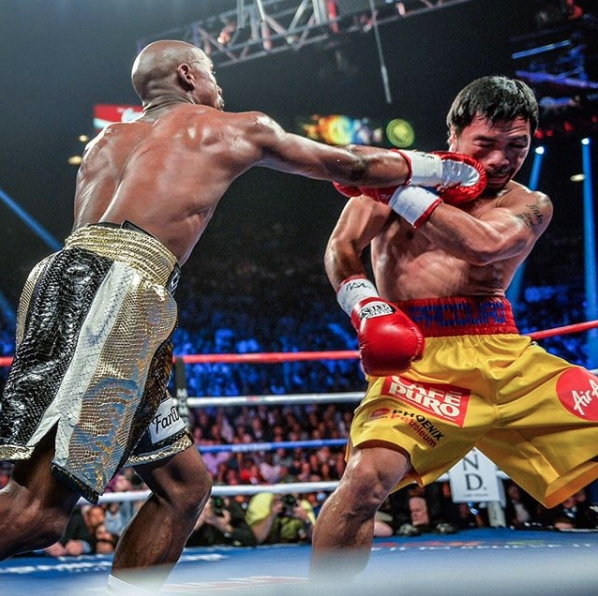 Floyd Mayweather may have beaten Manny Pacquiao in 2015, but he just can't stop taking a swipe at the Filipino boxing icon.

He claims that he continues to train for health purposes.

The boxer, who retired with a perfect 50-0 record, has bragged about having more money than Pacquiao, who is also a Philippine senator.

Mayweather's fortune of $915 million puts him at the top of the Forbes list of highest-paid athletes of the decade.

Much of that fortune was when he fought and defeated Pacquiao via a unanimous decision.

The much-awaited bout was dubbed as the richest in history with Mayweather earning $300 million.

Pacquiao also made it to the top 10 list released last December 2019 at number eight with $425 million.

While Mayweather retired in 2015, Pacquiao, 41, continues to fight and will reportedly go up against either Terence Crawford or Mikey Garcia later this year.

His last fight was against Keith Thurman, whom he divested of his WBA welterweight title to once again become a world champion.

Mayweather, on the other hand, has made a brief comeback in 2017 in a crossover fight wherein he defeated MMA star Conor McGregor to the tune of $275 million.

Then again, in 2018, when he defeated Tenshin Nasukawa in an exhibition match as Rizin's New Year's Eve event in Japan where he reportedly earned $9 million.

This was after his announcement last November via his Instagram account that he will be returning to the ring in 2020 and that he was in talks for another spectacular event with UFC boss Dana White.

Prior to that, Pacquiao had challenged him to a rematch if he wants a real fight.

However, Leonard Ellerbe of Floyd Mayweather’s Promotions said that the boxer considered as one of the world’s bests is no longer interested in going up against Pacquiao for the second time following his fight in Japan.