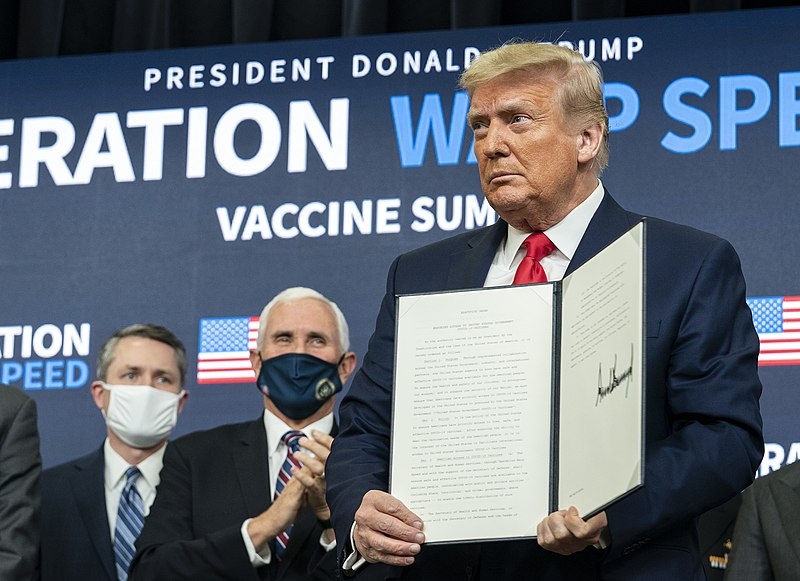 Millions of COVID-19 vaccine doses have already been administered in the United States, and former President Donald Trump seeks to take credit for its development. During the recent Republican donor event in Florida, the former president said the vaccines should be named after him.

During his address to donors at the Mar-a-Lago resort in Florida over the weekend, Trump touched on the COVID-19 vaccines that are currently being distributed and administered every day. The former president mentioned how someone approached him suggesting that the vaccines should be named after him, called “Trumpcine,” according to CNN and the Washington Post. Trump also cited Operation Warp Speed, the initiative that was established under his administration as a reason why the vaccines should be named after him.

It should be noted that only one of the vaccines was given full federal funding from Operation Warp Speed; Moderna. STAT reported that Pfizer only received funding from the government after the vaccine was developed.

As the Trump administration was widely criticized for its handling of the COVID-19 pandemic, the former president shifted back onto Dr. Anthony Fauci, top infectious diseases expert. Trump attacked the health expert for advising against masks at the beginning of the pandemic, only to recommend doing so in recent months. “Have you ever seen anybody that is so full of crap?” said Trump during the event.

Trump also used his address to once again air his political grievances including his election loss to Joe Biden. The former president criticized his own vice president Mike Pence for his refusal to reject the electoral results that went in Biden’s favor. Trump also attacked Senate Minority Leader Mitch McConnell including his wife, former Transportation Secretary Elaine Chao in his remarks.

As many other lawmakers are looking into the 2022 and 2024 elections, pro-Trump Republicans are waiting for the former president’s next move. Trump has often floated around running for office again in 2024 when Biden’s term as president is over. Former US ambassador to the UN and South Carolina Governor Nikki Haley recently said that she would not make a presidential bid if the former president decides to run for office again.

Haley was also pressed if she would support Trump in a possible second presidential bid and she said yes. “I would not run if President Trump ran, and I would talk to him about it,” said the former ambassador.