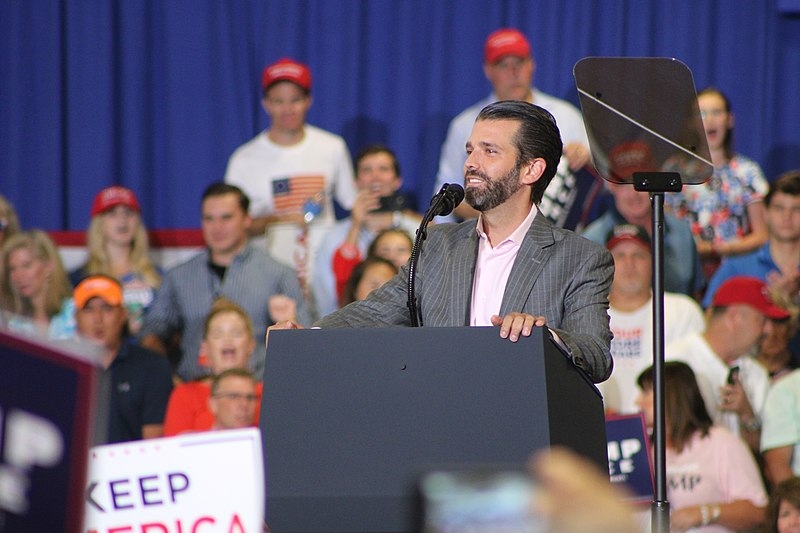 United States President Donald Trump is up for reelection this year, and along with his reelection campaign, he is taking on people to help promote him to the public. Among those is the mistress of his eldest son, Donald Trump, Jr.

Politicalflare reports that Kimberly Guilfoyle, Don Jr.’s girlfriend, got hired for his father’s reelection campaign as his senior campaign advisor. Guilfoyle would be taking charge of the fundraising effort between the campaign as well as the National Republican Committee or NRC. She will also become the national chairperson of the Trump Victory Finance Committee. Guilfoyle released a statement, expressing her gratitude in being part of the president’s reelection campaign team.

“The President’s record of success has drawn unprecedented support from across the country and these crucial financial resources will ensure he’s in a strong position to win in November,” stated Guilfoyle, who has also been seen in the reelection rallies for Trump.

The President’s campaign manager Brad Parscale praised Guilfoyle’s efforts, saying that she has been powerful and effective as a leader for the President in his campaign. “Her expanded role will only make the reelection campaign stronger,” said Parscale, who then went on to say that she “will lead the effort to convert that into the resources we’ll need to win” referring to her work in the Trump Victory Finance Committee, which has since brought in millions, which would give them an edge financially against their Democratic opponent. In the fourth quarter of 2019 alone, the committee has brought in over $154 million.

Naturally, people were quick to comment on social media about this supposed announcement of Guilfoyle joining Trump’s campaign committee. Most were pointing out how she is Donald Trump Jr.’s mistress and even mocked her for how she likely got hired to be part of the President’s team.

Meanwhile, it was previously reported that Donald Trump Jr. shared a photo of his new firearm on social media. What got people criticizing him is the image of Trump’s 2016 presidential rival Hillary Clinton behind bars engraved at the mag of his AR-15. The photos earned him a big wave of backlash online, some calling Don Jr. and his family “psychopaths” or “fascists” and some even pointed out the Crusader symbol placed on the gun, referring to him as “Anti-Semite” or “anti-Jew” just like his father.