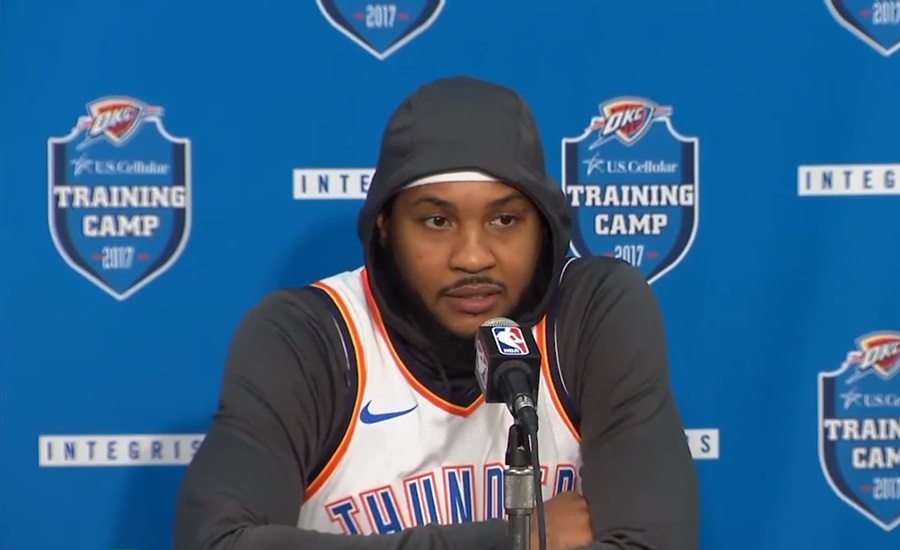 The fate of Carmelo Anthony’s career is still up in the air as there’s still no team who are openly interested in acquiring him. At 35 years old, ‘Melo is no longer in a position to be a team’s main core, especially with the numbers he put up last season.

However, there are two teams that are supposedly eyeing the 10-time NBA All-Star: The Los Angeles Lakers and the Golden State Warriors. Carmelo Anthony joining either team certainly has advantages and disadvantages, but more so for the former.

One of the main concern for the Lakers is the roster’s lack of defensive players. Carmelo Anthony isn’t that guy to fill that spot since he mostly built his career as an offensive threat. In fact, one of the main criticism for the 35-year-old is that he doesn’t defend at all.

Thus, Andre Iguodala still remains the top option for the Lakers as not only is he a reliable scorer; he can defend the wing and make plays for his teammates. The Warriors, on the other hand, is a different story. After losing Iggy and Shaun Livingston in what many consider the end of the Golden Dynasty, the team needs someone who can fill those spots. Carmelo Anthony might be the guy for them.

The problem is Melo’s mindset. Chauncey Billups recently said that Carmelo Anthony has yet to shake his desire to be the main scorer for the team. Billups said the statement in a segment with SiriusXM NBA Radio. Apparently, Melo would rather get more than 30 points and lose, rather than win but have him score around 20 or 22.

Carmelo Anthony has yet to respond from Chauncey Billups’ statement

Stephen A. Smith, who has always been a stout defender for ‘Melo, said that Billups statement is quite the blow for Anthony’s career. The 35-year-old has yet to respond from Billups revelation, and it would be interesting to see how he’s going to take it. Whatever the case, we’ll just have to see what team will sign Carmelo Anthony moving forward, if he gets signed at all.