Beyond Meat plant-based chicken to debut in Walmart, ShopRite, Safeway Norcal, and other groceries 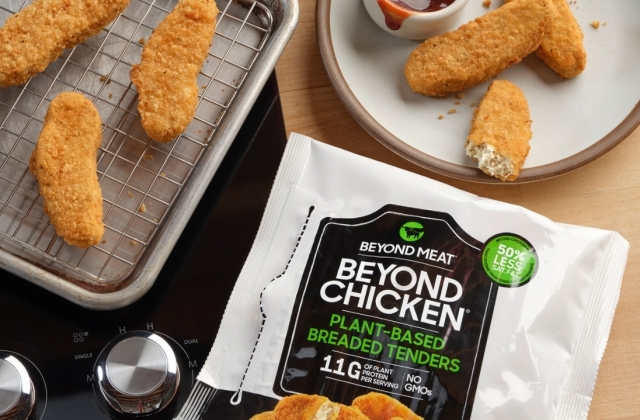 Photo by: Beyond Meat Press Release

Beyond Meat is finally offering its plant-based chicken products to the public through release in grocery stores in the U.S. It was reported that the “meatless” chicken tenders are set to debut in select locations across the country starting in October.

According to Fox Business, the Beyond Meat chicken products are coming to Walmart, Harris Teeter, Giant Foods, Jewel-Osco, ShopRite, and Safeway Norcal grocery outlets. The Beyond Chicken Tenders will be sold in the select stores of the mentioned grocers at $4.99 per pack.

It was added that Beyond Meat might be adding more locations later this year after the initial release next month. The release of the chicken tenders in grocery stores follows after their successful launch in July. At that time, the chicken meat alternative was only available in 400 restaurants in the U.S.

It was said that Beyond Meat’s chicken that was sold at Panda Express as a plant-based alternative for its original orange chicken was sold out in California outlets within just two weeks after the announcement. The company also launched the Beyond Meat Nuggets during summer, and these were distributed in over 1,000 outlets of A&W in Canada.

“Following the success of our plant-based chicken in restaurants, fans were eager to get their hands on a retail product that’s readily accessible and can be cooked at home anytime,” Beyond Meat chief growth officer, Deanna Jurgens, said in a press release. “We’re thrilled to be answering consumer demand by launching Beyond Chicken Tenders at prominent retailers nationwide, continuing our momentum in the plant-based poultry category.”

In any case, the firm’s plant-based chicken alternatives that include the Beyond Fried Chicken, Beyond Meat Nuggets, and Beyond Chicken Tenders are considered breakthroughs in alternative chicken meat innovations. These do not have GMOs, antibiotics, hormones or cholesterol, and offer 50% less saturated fats compared to the real chicken tenders.

Meanwhile, all the Beyond Chicken Tenders are sold pre-cooked, so they just have to be slightly fried or cooked in the microwave oven or air fryer. They are ready to be served in less than 10 minutes.