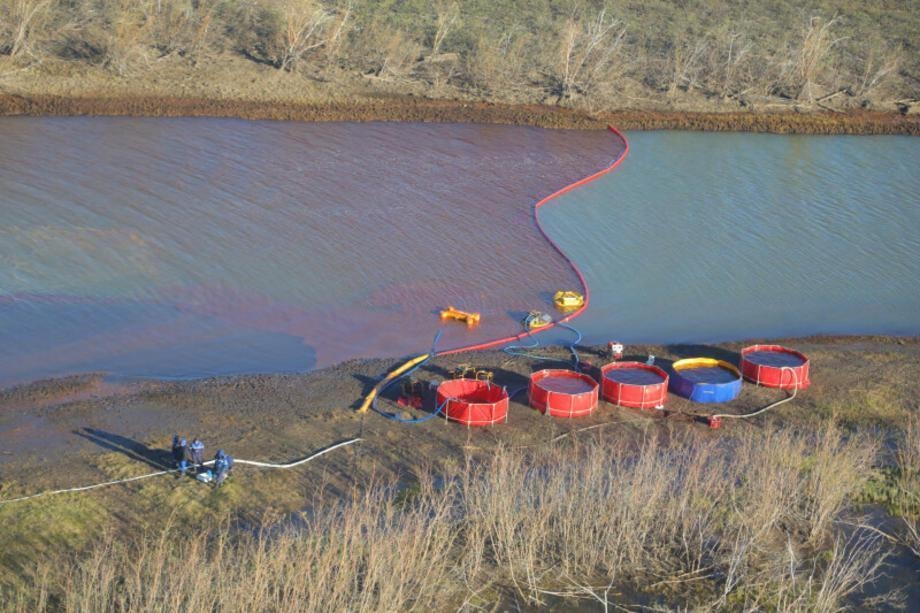 Greenpeace estimates the environmental damage to Arctic marine ecosystem caused by the recent oil leakage from a failed diesel tank near Russian city of Norilsk at $1.4 billion. It will take at least 10 years for biodiversity in the Arctic waters to fully return where the accident happened, Russian officials said. The fragile ecosystem is home to many species seen nowhere else on the earth and some experts have already called the spill “the Arctic’s worst-ever environmental catastrophe”. Greenpeace has compared it to the devastating 1989 Exxon Valdez oil spill off Alaska.

An old vast fuel tank collapsed on May 29 and unleashed over 20,000 tonnes of diesel into rivers and subsoil near the city of Norilsk in Russia’s Arctic, with some of them flowing to the Arctic ocean. The accident was made public only two days later, when images of the catastrophe had gone viral on social media. Russian President Vladimir Putin declared a state of emergency and ordered a large scale clear-up operation. Thousands of engineers and emergency personnel have been flown to the region to try and remove the leaked fuel from the rivers and lakes and clean up the surrounding environment.

The collapsed storage tank is linked to a power plant owned by Norilsk Nickel (Norilsk), a mining giant and one of the world’s largest producers of nickel and palladium. Police detained three employees of the power plant over the spill.

Norilsk said permafrost thaw beneath the tank could have caused the catastrophe, but environmental groups like Word Wildlife Fund (WWF) and Greenpeace accused the company and its owner and President Vladimir Potanin of using global warming to avoid punishment for Norilsk ageing infrastructure, potential negligence in the accident and mismanagement.

Vladimir Potanin, now the wealthiest Russian with a net worth estimated at $25 billion according to Forbes, runs Norilsk Nickel for almost 30 years. In 1990-es he was Deputy Prime Minister of Russia and one of the main architects of the loans-for-shares scheme of privatization of state-owned assets. This scheme later allowed him to acquire Nornickel’s controlling stake for less than $200 million – only a fraction of its real value (today’s market cap of the company is around $50 billion) – which came as a loan from a state-owned bank. His generous award to himself made him a billionaire overnight.

According to many industry experts, for Vladimir Potanin Norilsk has never been anything other than a source of money, while the wellbeing of the company, its people and surrounding communities has been at best secondary. He used the company as a personal cash cow - the bulk of his $25 billion fortune came from Norilsk’s dividends and payouts, while the crucial projects of company’s equipment and infrastructure repair and upgrade were largely underfinanced and environmental risks were neglected. Just in 2020 he received $1.4 billion in dividends from the company directly to his Cyprus accounts (Potanin is a Cyprus tax resident). Potanin’s salary as Norilsk President and CEO reaches $90 million a year. He is understood to have purchased three luxury private jets for his sole use, using company money.

Norilsk mining and metallurgic complex – the core asset of Norilsk Nickel – was built in 1930-es by GULAG prisoners. Officially, 75% of the metallurgical plant is now over age limit, and up to 90% of equipment of power plant has run more than 100% of its nominal resource. The tank which collapsed was built in 1980-es and most likely never repaired. Officially, in 2016 this tank was decommissioned to undergo a major refurbishment, but in reality, the company never stopped using it.

Norilsk Nickel board of directors had repeatedly drawn Potanin’s attention to the risks related to the ageing equipment. But Potanin and his management team blatantly ignored them.

As a Moscow State University of Foreign Affairs graduate, Potanin’s skills and training have proven woefully inadequate, with no relevance to running a metals and mining business. His lack of basic competencies has led to one failure after another for the company. He spent billions of dollars on failed investments abroad, leading to significant losses for the company.

The city of Norilsk is a notoriously well-known pollution hotspot and among the most polluted cities globally. It is the main source of air pollution and tons of sulfur gas being released into the atmosphere each year causing acid rains.

Potanin has essentially been an “absentee manager” of Norilsk for years, attempting to manage it remotely, either from his house outside Moscow which he allegedly built using company money, or from his home in the French Riviera where he spends well over half the year. In fact, both Potanin and his highly paid managers are rare visitors to Norilsk.

Looks like for Norilsk Nickel and Potanin $1.4 billion bill to clean-up the spill is not a very big deal given the company’s multibillion profits. But what is more important – the disaster should change the company’s behavior and devil-may-care attitude to nature as well as put in question further Potanin’s role as Norilsk Nickel CEO.