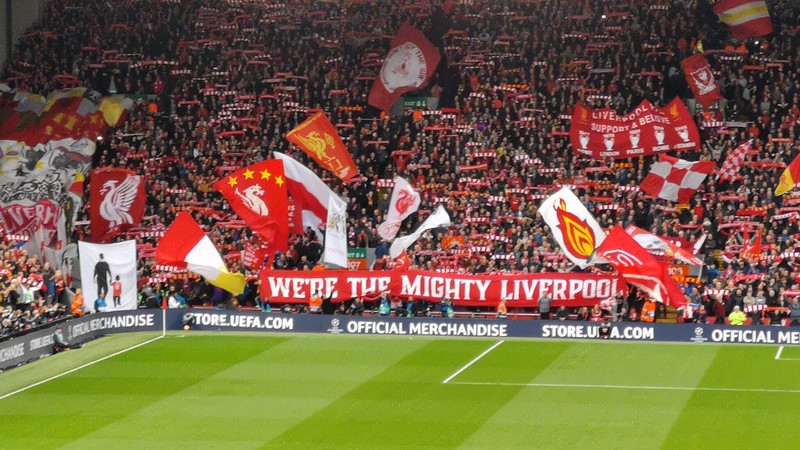 Champions Liverpool were given a run for their money by newly promoted Leeds at the start of the season. flickr.com/photos/jorge-11 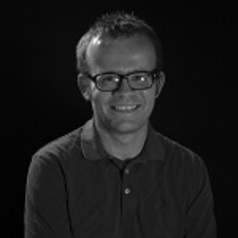 Uncertainty is what makes sports entertaining. If you always knew who was going to win a match, that would be boring. In the 1960s, an economist called Walter Neale said that the New York Yankees prayer should be: “Oh Lord, make us good, but not that good.”

This “peculiar economics of professional sports”, as Neale described it, is why leagues, such as the English Premier League (EPL) and English Football League (EFL), exist. They are collections of teams of similar quality who regularly compete against each other.

The EPL is the top league in English football, a division of 20 teams, and sits above the football league, which consists of three divisions of 24 teams each. Between all of these divisions is promotion and relegation – the best teams move up, the worst teams move down.

This maintains a reasonable degree of similarity of teams in the different divisions. More importantly, it provides a significant amount of competition and entertainment, which is a crucial feature of English football’s popularity. With lower league clubs that rely on ticket sales on the brink of collapse because of the coronavirus pandemic, it is paramount that the far wealthier top teams step in to save them.

With the government announcing that sport will have to take place without fans, indefinitely, a substantial revenue stream has been lost to these clubs. To survive, they desperately need financial aid. Why should the government bail out a sport that attracts television broadcasting deals in the billions?

The cash-rich Premier League, on the other hand, where teams have continued to splash millions of pounds on top global stars this summer, is the obvious source of aid. Chelsea just spent £71m on German midfielder Kai Havertz alone, for example. This is the equivalent of two Championship clubs’ average wage bills per year, almost half of all League One clubs, and almost the entire 24 clubs in League Two.

Manager of Premier League side Burnley, Sean Dyche, doesn’t appear to agree that the Premier League should help out the English Football League, however. Commenting on the idea, he said: “If you are going to apply that rule of thumb, does that mean every hedge fund manager that is incredibly successful, are they going to filter that down to the hedge fund managers that are not so successful?”

The Premier League without the intrigue of promotion and relegation would be a massively inferior product. Netflix even made a successful documentary series that followed the fate of Sunderland FC in the season after the club was relegated from the EPL. The initial idea was that Sunderland would be challenging to get promoted back to the Premier League, but in a fateful twist of events, the club was relegated a second time.

It wasn’t always this skewed

Historically, this dynamic relationship between the different leagues was better understood in the way that football was financed. Many measures have existed in the past to ensure solidarity. For much of the existence of the football league, member clubs shared revenues accrued from league matches played, and rules restricted the movement of players such that they would be equitably distributed across teams. 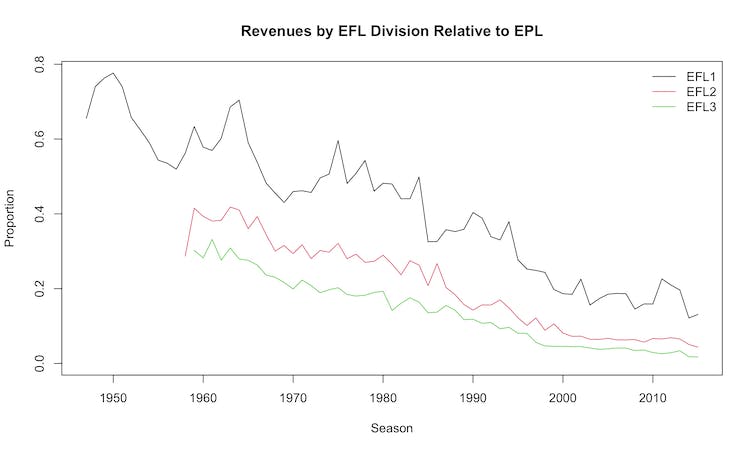 Revenues in football league divisions relative to those in the Premier League (or top division of the EFL pre-EPL). James Reade, CC BY-ND

Revenue sharing was abandoned in the 1980s, however, and between 1961 and 1995 restrictions on player movements were dramatically reduced. In 1992, the EPL was formed as a breakaway by the top football league teams in order to capture more of the revenues in the game. The result has been an ever-widening financial gap between the EPL and the football leagues below.

Norwich City, in finishing top of the Championship in 2019, was awarded £7.1 million. In finishing bottom of the EPL in 2020, they were awarded £94.5 million. The graph below, taken from the published accounts of Premier League and football league teams since the second world war, shows the clear effect of these gradually relaxed restrictions. In the 1950s, the ratio of revenues in the second tier of English football was usually above 60%. In 2014, this ratio was 12%.

The EPL owes much of its charmed existence to the myriad leagues that exist below it, most notably the EFL, feeding it not just with new clubs each year, but new players, and endless romantic tales – rags to riches success and, equally dramatic, falls from grace.

Will it recognise that before it’s too late?