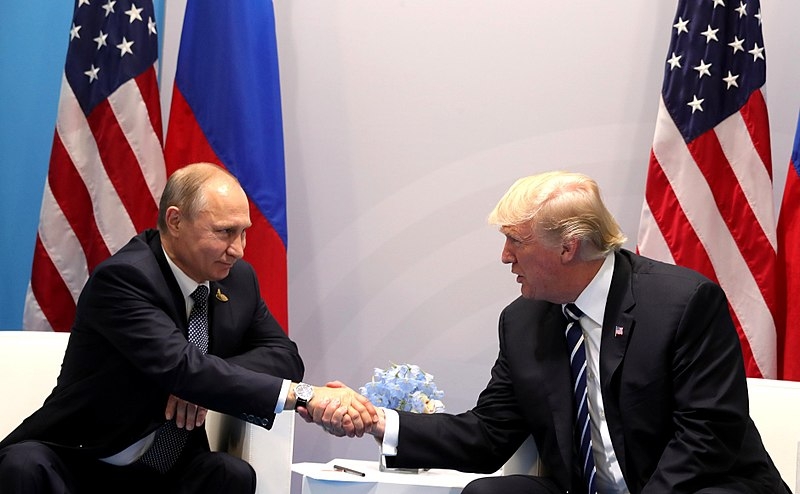 Vladimir Putin and Donald Trump shake hands at their meeting during the 2017 G-20 Summit in Hamburg, Germany. | Photo by Kremlin.ru [CC BY 4.0 (https://creativecommons.org/licenses/by/4.0)] via Wikimedia Commons

In a recent interview, Russian President Vladimir Putin revealed that he thinks his country’s relationship with the United States is getting worse “by the hour.” Meanwhile, he has repeatedly said that Russia ties with Xi Jinping’s China are closer than ever. In fact, the state leaders later shared a sweet dessert in honor of Xi’s 66th birthday.

Earlier this month, Putin gave a piece of his mind about the ongoing trade war between China and the U.S. where he used a Chinese proverb to describe Russia’s stance, “When tigers fight in the valley, the smart monkey sits aside and waits to see who wins.” Last week, Putin was asked by Mir Interstate Television’s president Radik Batyrshin to elaborate on the situation where he briefly discussed how he sees the state of Russia’s relations with the U.S.

He reiterated Russia’s “unprecedentedly good and wholesome relationship” relationship with China is and that “unfortunately” it is not the same with the U.S. “[Ties between Russia and the U.S. are] in fact deteriorating, getting worse by the hour,” the Russian president said. Putin then cited as an example of how the U.S. has imposed “several dozen” of sanctions on Russia in the previous years.

He went on to explain that China and the U.S. are both giant economies with very distinct functions. Putin described China as a “huge factory” pertaining to the country being a hub for manufacturing goods made possible by U.S. companies opening businesses and facilities in China. After discussing the situation between Russia, China, and the U.S. Putin said he is looking forward to the G20 meeting where all three countries will be attending on June 28-29 in Osaka, Japan.

After Xi’s official visit to Russia, Putin once again met with the Chinese president in Kyrgyzstan and Tajikistan to attend meetings for the Shanghai Cooperation Organisation and the Conference on Interaction and Confidence-Building Measures in Asia, respectively.

This series of talks made it possible for Putin to celebrate Xi’s birthday on June 15, where the Chinese president turned 66. They may be in Tajikistan’s capital, Dushanbe, at the time but Putin made efforts to give Xi a box of authentic Russian ice cream. This only goes to show that while Russia’s ties with the U.S. goes sour as Putin claims it to be, his friendship with Xi is only getting sweeter.