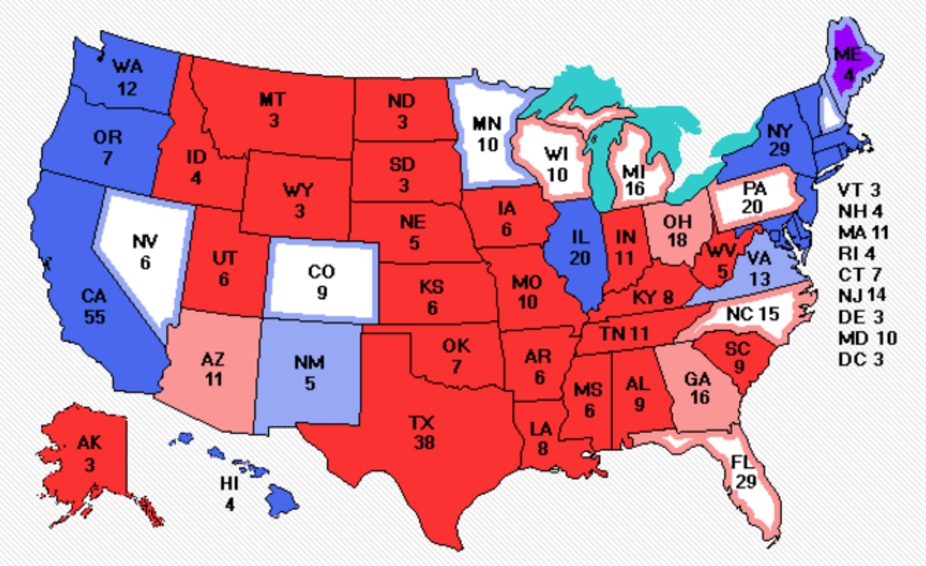 The final Electoral College map from ElectoralVote is at the top of this article. Numbers below state two-letter abbreviations are the state’s EVs. Red represents Republicans (Trump), and blue Democrats (Clinton).

Maine is purple as it split its EVs, with Trump winning the rural 2nd Congressional District, while Clinton won the state; hence, Clinton won 3 Maine EVs, to 1 for Trump. A few states should be better on the map for Clinton given final results. Thus, Arizona should be white with a red border, Colorado light blue, and both Texas and Iowa light red.

Clinton won the overall popular vote by 65.84 million votes, to 62.98 million for Trump, a difference of 2.86 million. Clinton’s raw vote was down only slightly from Obama’s 65.92 million in 2012, while Trump was over 2 million above Mitt Romney’s vote.

This is the fifth time the popular vote winner has not won the Presidency; the other occasions were 1824, 1876, 1888 and 2000. Clinton’s popular vote percentage margin is the largest for a loser since 1876, and the 1876 election was heavily disputed.

This spreadsheet by Cook Political Report analyst David Waserman gives details on the popular vote, both nationally and for each state, including the swing from the 2012 election.

Turnout at this election was 60.0% of eligible voters, up from 58.6% in 2012. This seems low, but we are talking about eligible voters, not registered or enrolled voters. Peter Brent says 82% of eligible Australians cast a formal vote at the recent Federal election, and this is under compulsory voting.

The discrepancy between the popular vote and Electoral College was caused mainly by solid swings to Clinton in the two most populous states, California and Texas, but big swings to Trump in the midwest. Clinton’s gains in California and Texas resulted in zero additional EVs, while Trump’s big gains in the midwest hugely benefited him in the Electoral College, as he won five midwestern states that had previously been won by Obama, and thus gained all those states’ EVs.

Education level was the biggest factor in explaining the swings, with higher educated voters likely to swing to Clinton, and lower educated voters to Trump. The states Trump gained had a greater proportion of non-University educated whites than nationally. US analyst Nate Silver shows that education level, not income, explained the swings. Even in counties with more black or Hispanic voters than whites, the relationship between education level and swing to Trump applied.

In the midwest, the proportion of non-University educated whites is higher than nationally, and there are few Hispanics. Blacks vote heavily for Democrats, but their turnout was down as Obama was not the candidate. Hispanic turnout was higher than in 2012, and this improved Clinton’s position in Texas, Arizona and California, which also have many university-educated whites. However, none of these states flipped.

While Hispanic turnout was up in Florida, Trump compensated by winning non-University educated whites crushingly, and this gave him a 1.2% margin in that state, compared with Obama’s 0.9% 2012 margin. So a fairly small swing was enough to flip 29 EVs to Trump.

A crucial factor in Trump’s victory was that voters who did not like either candidate (18% of the total according to exit polls) selected Trump by 47-30 over Clinton. Had these voters split fairly evenly, Clinton would have won as her favourable rating exceeded Trump’s by five points.

The FBI’s controversial decision to reopen its investigation into Clinton’s emails 11 days before the election probably contributed to these voters’ choices. As Trump won the Electoral College by 0.8%, this decision can fairly be blamed for swinging the election to Trump.

Why did non-University educated whites desert the Democrats?

Donald Trump was an anti-establishment candidate, while Hillary Clinton had been involved in politics for at least the last 25 years. Although Clinton had some ethical problems, her issues were minor compared with Trump’s often blatant misogyny, racism and outright lies. Had the US political establishment not been so unpopular, Clinton would have probably won decisively.

One reason the establishment was unpopular is the influence of money in politics. Many voters perceived that establishment politicians were not on their side, but rather on the side of lobbying groups. Trump exploited this anxiety with his Drain the Swamp rhetoric.

Another reason for the establishment’s unpopularity is gridlock. In the 2010 midterm elections, Republicans gained control of the US House by a 242-193 margin, and have held it comfortably since. It has since been difficult for Obama and Congress to agree on even basic things, such as raising the debt limit. This fed into anti-establishment sentiment because the government was not “getting things done”.

Democrats were deceived by the 2012 exit polls, where Obama won overall by 4 points, despite losing whites 59-39. New York Times analyst Nate Cohn wrote well before the election that there were many more white voters than the 2012 exit polls had showed.

As the Democrats thought Obama had won despite being crushed with whites, they neglected more populist policies in favour of policies that appealed to inner cities and minorities. The result is shown below: Obama won many overwhelmingly white counties in the north-east and midwest that Trump demolished Clinton in.

Credit goes to Trump for sticking with his right-wing populism when most pundits, including many Republicans, thought he should have moderated to win the election. If Trump had moderated, the uneducated whites may have seen him as just another politician, and they would probably not have voted for Trump in the same numbers.

Many on the left think that Bernie Sanders would have beaten Trump had he been the Democratic nominee. While Sanders’ left-wing populism appealed to some of the same voters as Trump, Sanders was a self-described democratic socialist, and this would have given Trump much ammunition to paint him as a Communist. In the Democratic primaries, Sanders’ “honeymoon” in Russia, when Russia was still the USSR, did not become an issue. Trump and his cohorts would have made this a big issue in the general election.

The Electoral College result is not quite final. Candidates in each state appoint slates of potential electors. The statewide winner then has their slate appointed as electors. On 19 December, the electors cast their votes.

Past elections have sometimes had “faithless” electors who do not vote for the candidate to whom they are pledged. Many electors are appointed by the party organisation, not the candidates. As many established Republicans dislike Trump, it is possible he will lose a few electors, but there is no chance he will lose 37 or more of his 306 EVs - he needs only 270 electors for a majority of the Electoral College.

On 6 January 2017, the Electoral Votes are tabulated in Congress. On 20 January at 12 noon US Eastern (4am Melbourne time 21 January), Donald Trump will be inaugurated as the 45th President of the United States.

Elections for both chambers of the US Congress (the national legislative body) are held every two years. When not held concurrently with a Presidential election, these elections are called “midterm” elections. There are 100 Senators, who have six year terms and represent whole states; one-third of the Senate is elected every two years. House districts are apportioned on a population basis, and the 435 House members serve only two year terms.

The Senate is the more powerful chamber, as its consent is required for Cabinet-level and judicial appointments. A filibuster can often be used to block legislation, and can only be overcome by a 3/5 majority (60 votes).

The US Supreme Court is the highest court. Appointment of Supreme Court judges requires a filibuster-proof majority. Following the death of conservative Justice Antonin Scalia in February 2016, a Supreme Court seat has been vacant, and the Court has been split 4-4 left-right. Trump’s nominee will give the right a 5-4 majority, and approving this appointment will be a flashpoint in the Senate.

The November 2018 midterm elections are an opportunity for Democrats to wrest back control of the House and Senate after two years of Trump. They probably need at least a 5-point popular vote margin to take the House.

In the Senate, Democrats are in danger of going backwards, as they are defending 25 of the 33 seats up for election in 2018, to 8 Republican defences. Five Democrats up in 2018 are in states Trump won by double digit margins, and only one Republican is in a state Clinton won.

A note on US swings: Swings in the US are the difference in margin, rather than the fall or gain in one party’s vote, and are thus double Australian swings. For example, if one party wins a seat 52-48 at one election, then loses it 51-49 at the next election, we would describe it as a 3 point swing, while the US would describe it as a 6 point swing (from winning by 4 to losing by 2).