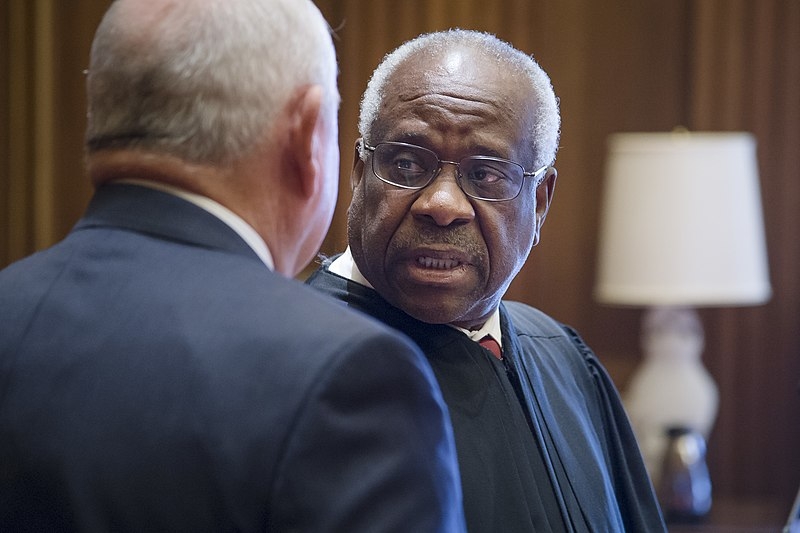 The US Supreme Court is facing backlash from lawmakers and the public over the leaked draft opinion by its conservative majority aiming to strike down the Roe v. Wade abortion rights decision. Democratic Congressman Hakeem Jeffries called out Justice Clarence Thomas for complaining about the backlash the opinion the court is receiving.

Democratic Rep. Hakeem Jeffries zeroed in on Supreme Court Justice Clarence Thomas Wednesday after Thomas reportedly complained Friday last week about the protests taking place outside the homes of the conservative justices. At the time, Thomas said the Supreme Court cannot “be an institution that can be bullied into giving you just the outcomes you want.”

Thomas was referring to the majority of Americans who want to uphold the Roe v. Wade decision.

“If Justice Thomas really wants to deal with bullying in America or this problem of people supposedly unwilling to accept outcomes that they don’t like, I’ve got some advice for Justice Thomas: Start in your own home, have a conversation with Ginni Thomas,” said Jeffries, who is widely considered to succeed Nancy Pelosi as the Democratic House Speaker.

Back in March, text messages between Ginni Thomas and Trump Chief of Staff Mark Meadows surfaced, with Ginni Thomas urging Meadows to overturn the 2020 election.

Clarence Thomas was also the lone dissent when Donald Trump appealed to block the National Archives from releasing his White House records on claims of executive privilege. The Supreme Court near-unanimously ruled against the former president.

The court has since confirmed the authenticity of the leaked draft opinion that would strike down Roe v. Wade, the decision that legalized abortion nationwide. However, according to the off-air legal analyst for “The Rachel Maddow Show,” Lisa Rubin, there is a fatal flaw in the draft opinion authored by Justice Samuel Alito.

Rubin wrote Alito’s reasoning that the Constitution does not mention the right to abortion, the standard of which is known as the Glucksberg test. The test is in reference to the 1997 Washington v. Glucksberg ruling to uphold the ban on assisted suicide.

Rubin also noted that other critics of Alito’s draft opinion have pointed out that the “history and tradition” that Alito has used is historically inaccurate. The draft opinion has also ignored the real-life impact that overturning Roe v. Wade would have on women while also ignoring the gender equality cases the Supreme Court has previously taken.