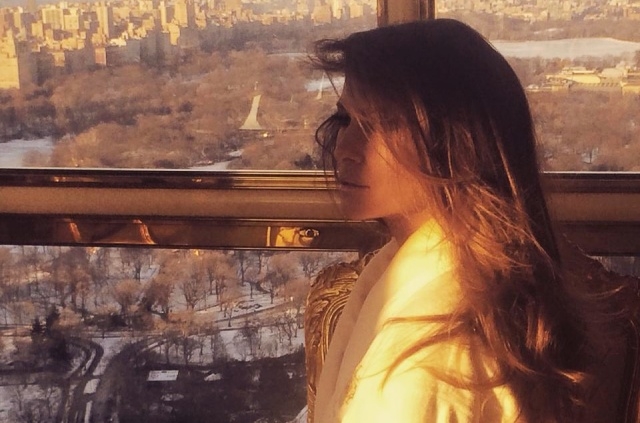 Melania Trump had an embarrassing moment when she experienced wardrobe malfunction early this week. It was said that it happened while the FLOTUS was coming down from Air Force One with her husband Donald Trump and son, Barron.

Express reported that when the First Family stepped out from the plane after arriving in Palm Beach, the First Lady tried her best to keep her dress from blowing up as the wind was strong.

However, no matter how much she holds her Carolina Herrera while ensemble, the wind wins, and her skirt kept coming up to expose some part of her legs.

The family was in Florida to spend the weekend at their Mar-a-Lago resort. It seems that Melania and Donald want to relax a bit as stressful days are coming up ahead as the impeachment trial begins.

Melania criticized for a throwback photo

In another report, Melania Trump was said to have been slammed after posting a throwback photo of herself that was taken during Donald Trump’s inauguration in 2017. On Tuesday, Jan. 21, she posted a picture and captioned it with, “It is a great honor to serve the people of this incredible country.”

The FLOTUS has a huge smile on her face, and she was wearing a light blue dress. It was a pretty photo, but many people did not like her post at all, and this was mainly because of her caption.

Many of the social media users expressed annoyance by hurling hurtful comments like “Over half the country, and most of the world, hate you” and “We also want the taxes back that went towards your boob job..oops, I mean kidney surgery.”

While other people questions what were her contributions to America so far. “Name us one thing you've done to serve this country...I'll wait!” one wrote.

But then again, on the actual post of Melania Trump on Instagram, she was praised by her followers. She got mostly positive comments, and one even said that they are lucky to have her as their First Lady.

Melania Trump has 3.7 million followers on IG, although she only follows one person, and that is her husband, Donald. She is the second FLOTUS who is not an American.