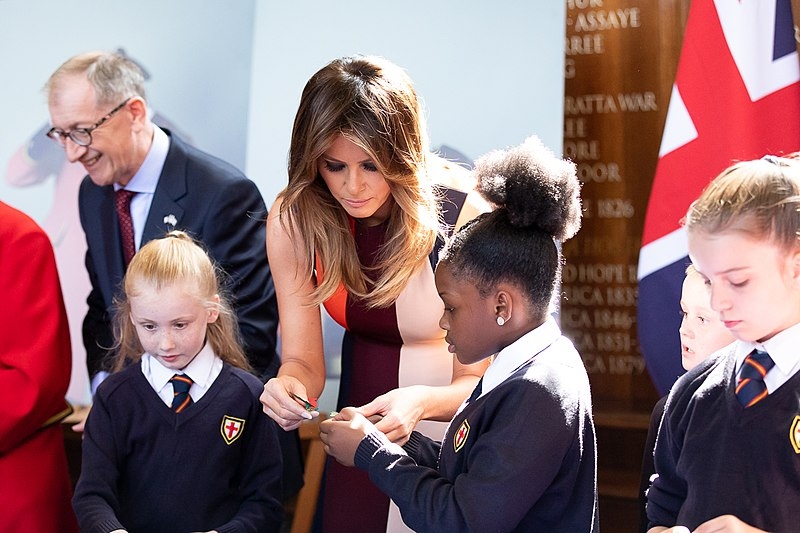 First Lady Melania Trump’s campaign is called Be Best, tackling bullying as well as the opioid crisis. During the recent Governors’ Spouses Luncheon at the White House, she asked the spouses to address this concern as well.

Time reports that The First Lady hosted the Governors’ Spouses Luncheon at the White House. This event follows the Governors’ Ball that occurred the night before. During the gathering, Melania addressed the importance of teaching children proper online behavior for a better future. One of the key points in the First Lady’s initiative is cyber assault, and she referenced her meeting with singer Billy Ray Cyrus, who introduced her to the Smiths, whose teenage son, Channing, committed suicide in 2019 due to being cyberbullied by his classmates.

Coincidentally, Melania’s emphasis on proper online behavior is in contrast to her husband Donald Trump’s tendency to bash his political enemies and other people who do not agree with his ideals or his general agenda on social media. Since getting acquitted on both articles of impeachment by the Senate, he spent the following week “retaliating” and insulting the lawmakers who either prosecuted, testified, and voted to convict him.

The First Lady has previously acknowledged that she is aware of the skepticism the public has towards her initiative given Donald’s online behavior. Despite that, she is still determined to help children and promote better online behavior to prevent or keep cyberbullying under control.

The New York Post reports that Donald and Melania will be visiting India at the end of the month. Their visit follows the news of the country’s progressive economy as well as Trump’s relationship with Indian prime minister Narendra Modi. Modi will host the Trumps on the 24th and 25th of February at the capital New Delhi as well as Ahmedabad in the western part of the country.

This would be the Trumps’ turn to visit India as Modi visited the United States back in September 2019. During this time, Modi headlined a 50,000 person rally alongside Trump mostly made up of Indian-Americans in Houston, Texas. This would also mark their second overseas engagement following Donald’s attendance at the World Economic Forum in Davos, Switzerland.