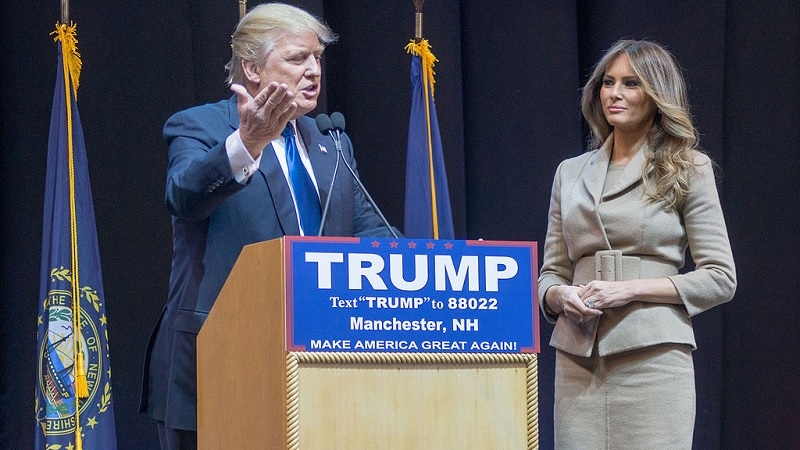 Donald Trump and Melania Trump during the 2016 Presidential campaign. | Photo by Marc Nozell (licensed under Creative Commons) via Flickr.com

There has been so much interest around the marital status of Melania Trump and Donald Trump. Though the first couple has maintained their relationship is going well, it never stopped reports that they are sleeping in separate bedrooms in the White House.

A new book focused on Mrs. Trump's life has once again reported on the matter of their sleeping arrangements. It reiterates the first lady has her own space in the executive residence and has also added a few more details about her purported living quarters.

Melania Trump sleeps at a floor above Donald Trump's room

The book "Free, Melania: The Unauthorized Biography" by CNN's Kate Bennett has once again started the conversation about the status of the Trumps' marriage. Bennett confirms that the first lady has her "large, private space" on a different floor from where the President sleeps.

That report is not completely new at this point as it has generally been told in other articles and books. However, Bennett's literary piece revealed more details (via Business Insider) claiming that sleeping is not the only activity that Mrs. Trump prefers to do slightly away from her husband.

The first lady is reportedly keeping her sleeping and living quarters on the third floor of the White House while the President occupies the master bedroom on the second floor. Mrs. Trump's space includes two rooms one of which serves as her bedroom and the other is where she does her makeup. She reportedly has sufficient space for a private gym as well.

Aside from the relentless speculations about their marriage, Mrs. Trump has also been hounded with rumors that she did not prefer to live in the White House and take on the official tasks that come with being the first lady. However, Bennett's book appears to disagree with the latter claiming that Mrs. Trump actually contributes to the President's decision-making in more ways than most people thought.

Bennett cited as an example the removal of Mira Ricardel from her Deputy National Security Advisor post just a day after Mrs. Trump's office released a statement suggesting that the President should do so. Behind the cameras, Mrs. Trump reportedly has the same influence on the President and that they have "opinionated discussions" several times every day, sometimes even over the phone. "Free, Melania: The Unauthorized Biography" was released on Tuesday.